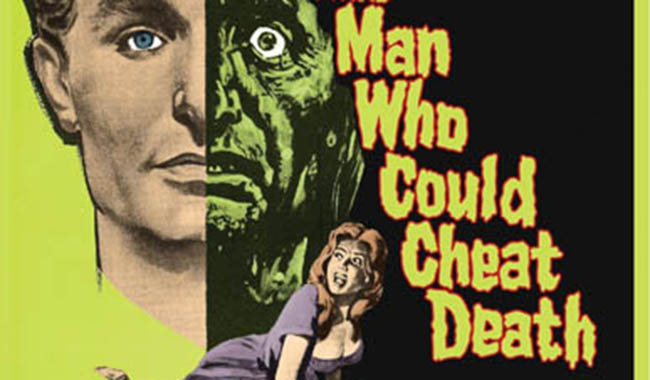 The Man Who Could Cheat Death Review

Everyone loves a Hammer film. Since the studio had enjoyed a renaissance with their gothic remake of Frankenstein with The Curse of Frankenstein in 1957 the studio set about to become a horror studio making low to mid-budget British films. Following their success of their Frankenstein version of the 1931 Universal film the studio explored other gothic horrors from the Hollywood studio including new versions of Dracula, The Mummy and The Hound of the Baskervilles before exploring a play called ‘The Man in Half Moon Street’ by Barré Lyndon. The play was then made into a mild horror film in 1944, but this time by Paramount and not Universal (Paramount were also this film’s distributor for Hammer). The studio had lined up all the horror regulars: Christopher Lee, Jimmy Sangster (writer), early Hammer scream queen, Hazel Court, cinematographer Jack Asher and director Terence Fisher with the usual production team. Peter Cushing was offered the part Anton Diffring would play. It was suggested that Cushing turned down the part from exhaustion as well as not rating Sangster as a scriptwriter. Either way he didn’t play the part.

Anyway, the end result is a weaker film from the studio than those which went before. The setting and time of the film has changed from 1940s London to 1890s Paris (in keeping with Hammer gothic) and Diffring’s character name has been changed from Julian Karell to Georges Bonnet. Those surrounding Bonnet and in his circle don’t realise that the man who appears to be in his mid-30s is in fact 104-years-old and relies on a secret potion and a transplant of the thyroid gland every 10 years to keep him alive and youthful. For some curious reason when he is late in taking the potion he goes green, his eyes bulge and has an acidic touch. He also must murder in order to get a fresh gland. His 10-year-cycle is coming up as he eagerly awaits the arrival of his old friend and surgeon doctor, Professor Ludwig Weiss (Arnold Marlé) who is to carry out the operation. Unfortunately the ageing Weiss has recently had a stroke rendering his arm disabled. He finds a new surgeon in the friend of his girlfriend (Hazel Court), a Dr. Pierre Gerard (Christopher Lee). Weiss is starting to see that Bonnet is turning into megalomaniac and that is probably resorting to murder to protect his secret and to attain the gland. He too gets a sticky end.

The problem with The Man Who Could Cheat Death is that it is a very talkative film with little action and ultimately exposing its play roots. Diffring, more used to playing German officers in war films is cold in the lead role. If this were Cushing he would give the character an element of tragedy and sympathy – he even was able to do this whenever he played Baron Frankenstein. We can forgive the garish colours and cheap sets for after all this is a Hammer film and Hazel looks fantastic in Blu-ray with her velvet dress and fiery red hair. Yet the direction by the normally wonderful Terence Fisher also seems more lacklustre than normal for him. Extras on the disc are quarter hour talks each by gothic horror experts Kim Newman and Jonathan Rigby. Both are typically engaging and knowledgeable on their subjects if a little repetitive between them. Released by Eureka! this is a typically handsome package.