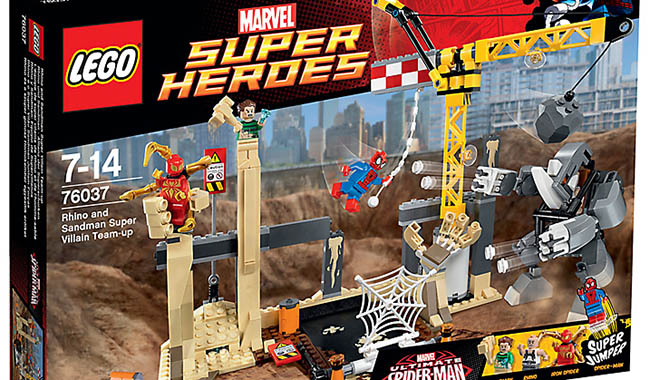 The most requested feature of any superhero sets released by Lego usually is the inclusion of new characters as minifigures. The catalogue of villains in particular for both Marvel and DC is staggering and there are many classic enemies that have still yet to be seen in minifigure form anywhere outside the Lego games at least.

The Rhino and Sandman Supervillain Team-up has really taken to task to cater to this audience. Sandman and Rhino are both old school adversaries of Spider Man going back to the origins of the Marvel comics (Sandman appeared first in The Amazing Spider-Man #4 in 1963 and Rhino a few years later in The Amazing Spider-Man #41 in 1966). Neither of these characters have ever appeared in a Lego set and nor has the Iron Spider suit. The iron Spider suit is a much more recent addition to the Marvel Universe, being a suit that Tony Stark built for Peter Parker, therefore incorporating the Iron Man’s red and gold colour scheme.

The minifigures yet again are great in detail and certainly worth the wait. Obviously Spider-Man himself has appeared in many sets by now, but Lego has done a minor update to the figure this time, meaning all four figures in the set are, for now at least, unique to this set. The Lego Spider-Man figure has always had completely blue legs, but for this new figure he finally gets his red boots. There’s no new detail on the figure otherwise, but the legs part is now dual colour. While not exactly an earth shattering improvement, it’s still a nice fix and certainly improves the figure. Perhaps we can expect to see a similar improvement to the Superman figure which could do with the exact same.

The Iron Spider suit looks the part as well. The printed gold on red does not work quite as well as on the Iron Man figures, but the look is still faithful to the comics. The mechanical arms on his back in particular have been captured perfectly and look remarkably like the comic version.

The Sandman minifigure is my favourite of the set. He appears just like he did in the Lego Marvel Superheroes game in his traditional stripy green shirt and khaki trousers. However, one of his arms has turned sand coloured as has a corner of his shirt. It’s a really simple but clever look that shows the character but also his superpower in a subtle way.

Finally we have Rhino, or in this case really just Aleksei Systevich. The version we are getting seems to be based more on the Amazing Spiderman 2 film version rather than the comic books. Therefore, there is no rhino suit, but instead a mech suit with some rhino characteristics which is brick built. The figure itself is pretty decent with a white sleeveless shirt with printed straps showing him being attached to the mech. Systevich has a bald standard ‘clone trooper’ head. I wish Lego had gone with their original design that they used in the above mentioned Marvell Superheroes game where we got the original Rhino suit as an oversized figure (like the Hulk figure). However, if they were going for the film look, then it would have been nice to get a custom head with the forehead tattoo at least.

The build starts with Rhino’s mechanical suit. Lego has started to do a lot these brick built figures in their sets such as the Ents in Lord of the Rings, Grool in Guardians of the Galaxy and the entire Lego Mixels line up. These do not compare to the Buildable Figures such as our review of General Grievous last week, but these work as larger figures in the minifigure scale. The Rhino mech suit really follows the same with various slopes and couple of ball joints making up a decent looking mech with a space for Systevich to be piloting it from. The arms both have two stud-shooters each which give nice playability to the suit and the look is ok to replicate the suit from the movie.

The rest of the construction effectively builds a little play-set which appears to be mostly a building or demolition site but with some Sandman elements built into it. I can imagine the concept for the set was amazing, but with only 300 odd pieces used for the set it really falls flat. Having built and examined the set for a good while, I still can’t figure out what everything in it really represents. We get a lot of sand coloured pieces which seem to make sand columns coming out from the earth and two large hands representing the Sandman in his battle mode. The fingers on the hands are movable and look decent, but there is no further movement available for the hands.

On the background we get gray large blocks presumably representing steel beams of the construction. Some of these have been made very loose in such a way that they can be broken off for some destructible scenery.

On the right side, we have the best part of the scenery which is a crane with a wrecking ball. The design of this feature is nice and accurate if a little small in scale, but it really is the only thing that keeps the play-set together.

The build is very simple with no tricky parts to it and can be completed in pretty quick time.

The Rhino and Sandman Supervillain Team-up clearly exemplifies the typical Lego superhero sets. The minifigure selection is great but the rest of the set is pretty disappointing. The Rhino mech suit is a decent design with some good play features, but the building site is just confusing as well as a little fragile in design. The Sandman hands are a great idea, but the final design just doesn’t give them enough flexibility to be a great play set, nor does it look good enough to stand by itself either. The turning crane is a nice design and we get a little web trap in the middle adding some play features, but overall it’s all just very forgettable.

Having said that, we really didn’t need another ‘Spider-copter’, ‘Spider-car’ or a ‘Spider-bike’ either, so Lego really are stuck when it comes to these Superhero sets. I truly believe the original idea for this set was great but they really somehow should have done more with it. Ideally, I would have liked to have seen the mech suit and Systevich figure changed for the original design Rhino bigfig and for those pieces used to add to the “sand” Sandman to really make it obvious and playable.

As it is, the minifigures yet again carry the set to being ok. For now at least, you do get four unique figures although hopefully the new Spiderman legs will become the standard going forwards. The Sandman fig, Iron Spider and Rhino are all great additions to any Marvel Lego collector/fan and therefore justify buying the set at least from the sales.