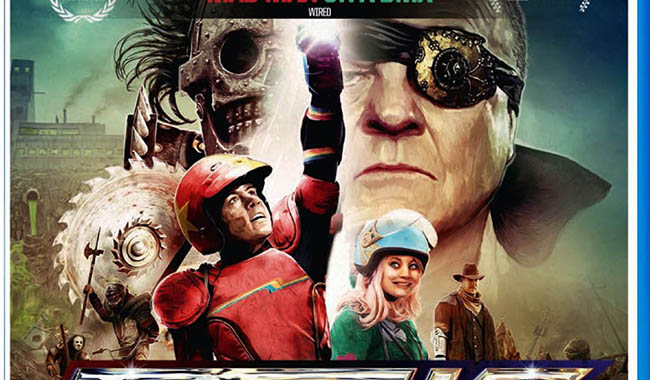 In the post apocalypse, a young kid scavenges his way round the rather damp looking wasteland amid a community ready to fall apart under the violent command of Zeus (Michael Ironside) who has declared himself leader.

Aimed squarely at retro trash apocalypse 80’s cheapies, Turbo Kid has the right idea in mind perhaps, but far from the right level talent to make it work.

And it’s largely the characterisation that makes this film fall with a thud onto its face.  The films that are being paid tribute to at least had actors that were trying to act. Sure they were largely bad themselves, but they didn’t know that.  Here the actors are purposely not trying it seems.

Michael Ironside being the prime suspect here is simply just not trying as the main bad guy. As a cult star in his own right from many a memorable performance from the era, it’s sad to see him take on this role in such a pantomime form. It robs the film of even taking it remotely serious, and when you can’t take a single thing serious then you stop paying attention to any detail the film-makers may want to lavish their story with.

Kills become simply laughing matters – if they are done well. The plot is secondary and characterisation is only entertaining if it is amusing.

Turbo kid then is just another fast track to disc feature that will get forgotten in less time than it took to view it.