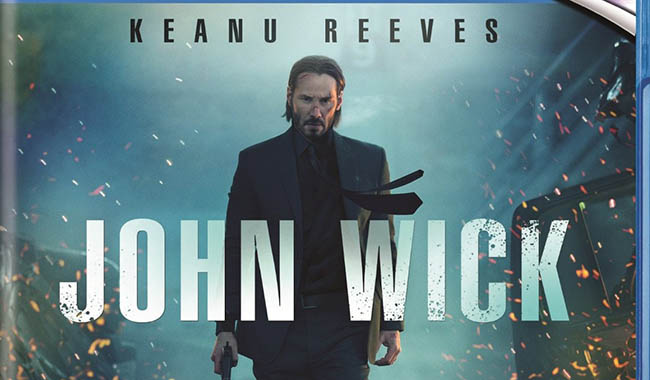 Here at Filmwerk Towers; something of a Keanu Reeves’ renaissance occured this year with the appearance of no holds barred revenge noir John Wick. Those who saw it, loved it on its theatrical run, and it has been scoring very highly on more and more contributors radar as one of the year’s best films. With that being the situation, we now have the Blu-Ray release in for review, so we will see how well it delivers.

First of all, a quick recap on the basic plot…and it is basic, but as those that are already switched on to this little movie; that’s not a bad thing.

John Wick is the tale of a retired uber assassin, living in reclusive grief after the death of his wife. His one tiny ray of light is the puppy his wife arranged to have delivered to him upon her passing…he loves that puppy…a lot.

While out gassing up his classic muscle car, John encounters Losef Tarasov (Alfie Allen), and his cronies. Losef happens to be the son of Viggo Tarasov (Michael Nyqvist), one of New York’s most powerful underworld bosses.

Losef covets the car, and hatches a plan to acquire it later on. Needless to say, things go a little pear shaped, and after invading John’s home; things get violent, John gets his ass kicked, and Losef takes great delight in killing the pooch…..big mistake.

To now cut this briefing a little shorter, it turns out that Losef had no idea who he was messing with and needs educating. Killing the pooch has unleashed the beast. John wants his pound of flesh, and will stop at nothing to get it. He rampages through the underbelly of New York’s criminal world trying to get to Losef, and we encounter many weird and wonderful characters, places, and customs hidden from normal view before it’s all over.

The film is very impressive, and somehow plays like a breath of fresh air in a way that it probably doesn’t fully deserve. The action is spot on, and manages to constantly eschew the close quarter camera position, and snappy confusing cuts that have become the post-Bourne norm. Instead, the camera hangs back and voyeuristically lingers over the frenetic action playing out in front of it. This is very hard to do, as it allows for so little cheating, or edit room ramping up of otherwise decidedly average fight choreography so common elsewhere.

Reeves is on the type of form that reminds us what a watchable movie star he really is. His actual maturity, dishevelled and burnt out demeanour, and even his ever so slightly out of shape physicality hit the bullseye from the first frame to the last. The filmmakers decision to balance Wick’s unmatched death dealing skills, with notable instances of him getting properly banged up, battered, bruised and bled; also works really well. It’s just a great looking, stylish, brutal ride from top to bottom.

The film is presented in remarkable 2.40:1 aspect ratio, which helps cement the film’s hyperreal noir landscape in true cinematic style. It’s dark, but not murky. Colours are vivid, and the HD format is generally sympathetic to the filmmaker’s work. The only area in which there is a slight demerit would be how some of the CGI effects look on a a TV screen. Some of the bullet hits, and associated blood spurts have that slightly ‘off’ look to them which, while never pulling you out of the movie; are a disappointment nonetheless.

English language audio is provided in the new Dolby Atmos format, as well as Dolby TrueHD 7.1.

The package includes a reasonable clutch of supplemental material. The jewel of the bunch for most will be the feature commentary by directors Chad Stahelski and David Leitch.

Next up are six featurettes detailing the various aspects of the production. They range in length, but while none are pitifully pointless (like many a disc I could site); they seldom exceed fifteen minutes. Quality it good, and they are fun; however, one gets the impression that there is a lot more where they came from, and some future release might get the motherlode one day.

Rounding out the package is the now ubiquitous Ultraviolet digital copy.

If you didn’t catch John Wick at the cinema (or even if you did), do yourself a favour and seek out this Blu-Ray. It’s a marvellously effective revenge noir flick, and worth every penny.

One get’s the distinct feeling that this is not the last we will be seeing of John Wick, after all he did tell us quite clearly “I’m thinking I’m back!”.