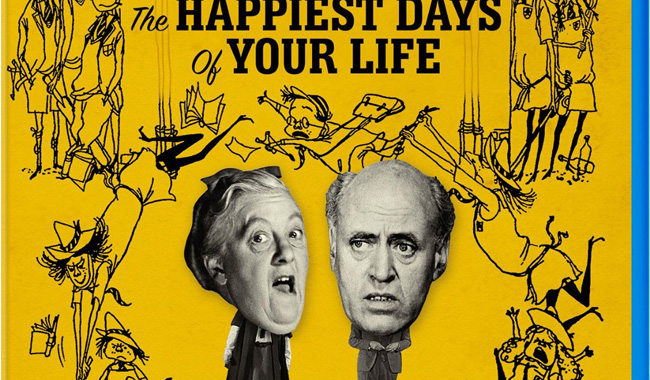 The Happiest Days Of Your Life Review

On the first day of term after the summer holidays the posh Nutbourne College all boys school, the teachers begin and wait the arrival of the boys in their charabanc from the local station. They are soon shocked to see the arrival of a group of female teachers (all the boys school teachers are male) leading a troupe of girls. They are headed by the matriarchal Ms. Whitchurch (played by the irrepressible Margaret Rutherford) from St. Swithen’s School for Girls. The rather brow beaten master of Nutbourne College (played by the equally irrepressible Alastair Sim), Wetherby Pond and as his teachers do an “I say” and are roundly beaten to the beds and staff room. After a few well-placed calls are made to Whitehall it would appear that this occurred due to a clerical error (which we see remains in some bureaucrats in tray). When the boys arrive a battle of the sexes continues to ensue with the women largely seeming to come out on top (more “Oh, I says”). The only thing that brings them together and make them realise they need to work together is when they receive notification that the School Governors for the boys school and some of the parents of the girls (who do not want their precious girls mixing with stinky boys) are expecting a tour at the same time. They finally work together as they farcically try to disguise the presence of the other, including Ms. Whitchurch desperately hiding a Playboy magazine and the caretakers moving the goalposts (literally as well as figuratively).

There is something quintessentially English about this film. Eccentricity, uptight and sexually repressed folk as well as class dialogue predominates. It’s also a very Ealingesque film, not lost on the films producing, writing and directorial team of Frank Launder and Sidney Gilliat. Based off a play by John Dighton, The Happiest Days of Your Life was written shortly after the war. The idea came about when after the war a number of schools had to share premises due to the Blitz and while I am sure there must have been clerical mix-ups it is very unlikely that they would have descended into the farcical mess that is presented in the film. This is rationing Britain still. But as well as having its routes and the look of an Ealing film, it is also itself the pre-cursor to the St. Trinians films in look and humour. But as Michael Brooke points out on one of the films extras, there is no rebelliousness from these kids, not the youth rebel behaviour of later teen Britain, but instead well behaved kids who at their worst are complicit with the badly behaved adult teachers. Carrying over to the St. Trinian films we can see the aforementioned Sim, a small part by the late George Cole as caretaker at the Ministry of Education and the wonderfully eccentric jolly hockey sticks Joyce Grenfell, the public schoolgirl who never grew up. Although in a small part she does shine through in this film and received much critical praise. There is also the opening credit sequence with cartoons by Ronald Searle who would go on to design the posters and the title sequences for the St. Trinians films.

Sim and Rutherford are as ever wonderful although surprisingly this was only one of two films together (the other being Innocents in Paris in 1953, although they didn’t share much screen time in that film) and there is some deliciously funny and often subtle dialogue. The extras on the film are plentiful including a 10 minute talk on the apparent tragic life of Rutherford and an overview of her early career and another by cartoonist Martin Rowson about Searle. Looking the sharpest its ever looked on Blu-ray from Studiocanal, it is a film that improves with several viewings.