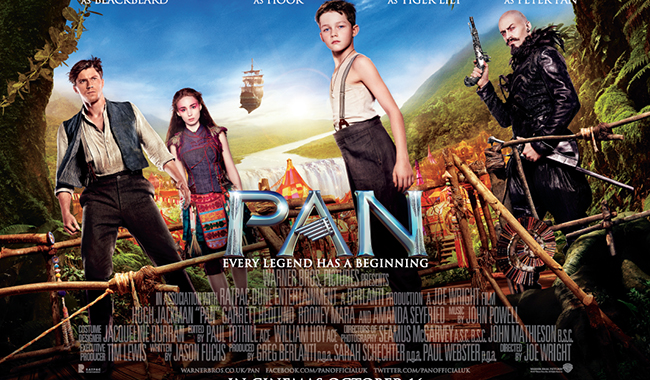 And so back to Never Never Land we go once more in this “prequel” story about how the boy who never grew up finds his way to there. Yes back in a time where even some people’s parent might still not have been born yet – Peter is dropped off by his mother at an orphanage, and is forced into a horrid life under the strict control of nuns.

But not all is as it seems – as on a semi-regular basis – children go missing!

This becomes all the more apparent to Peter when he himself becomes one of the missing, thanks largely to the band of pirate’s “Cirque De Soleil” style kidnapping.

Second star to the right and straight on till morning they go, reaching the eponymous magical land where peter is forced into slavery under the rule of one Blackbeard (Hugh Jackman).

But Peter has a secret that even he didn’t know about, and soon bands together with allies to escape and eventually take on the feared pirate

Hugh Jackman is on full pantomime mode here and attacks his role with relish. It’s also by some wonder that despite his rather cartoonish appearance that he actually has some of the most depth to offer from anyone – and more often than not his inner sadness is conveyed in some very tortured looks Jackman mugs at the camera.

A shame then that everyone else not only is in on the pantomime but completely act it as well. We won’t give too much of a hard time to the younger actors, but the adults are either whimsically written and then portrayed (Rooney Mara as Tiger Lilly), but the worst offender has to be James Hook himself as portrayed by Garret Hedlund.  Whilst Hook is dressed as a sort of Indiana Jones with a bad attitude, his need to overly pronounce, shout and eye-bulge every single line at the camera becomes tiresome all too fast. You can see that he’s clearly gone with a “care for less” attitude that Han Solo had in the original Star Wars movie, but imagine Harrison Ford leaping towards the camera every time he spoke and ramming his lines down his co-stars throats with a toothy grimace on his face as he did it – and that is pretty much what Hedlund is providing here.

But the whole Hook and Pan as friends angle is just an odd choice full stop and isn’t explored much (unless we are in for sequels!), it’s also just plain weird when you think and know that at some point Hook is going to spend much of his actual future time hunting and murdering those around Pan.

That aside – Pan is pretty much the twin sister that Spielberg’s film Hook in its tone and flavour. It’s colourful, an in your face score, some very kid friendly effects (Especially when people, are murdered by gunshot and turn into primary coloured smoke). An adventure story you will have forgotten most of by the time you leave. But if the audience for this is the under 10 year olds then there is plenty of them to be amused by that we all as kids were amused by growing up.

As a piece of adapted literature (with many alternations) placed on the big screen it’s a big piece of noise to entertain the whole family. But as a film that is actually any good for those paying attention and are slightly more grown up then this is a paint by numbers disaster on canvas.