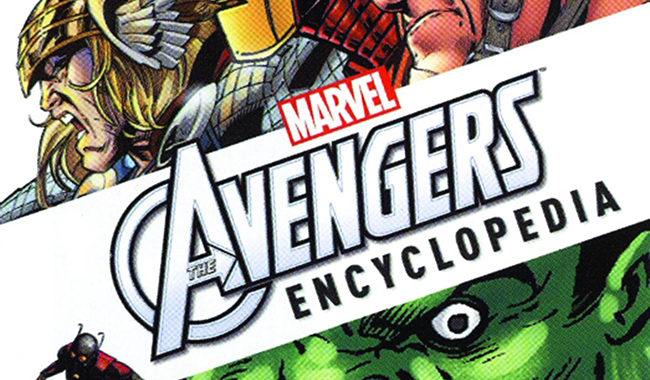 Having made their comic book debut in 1963 the Avengers have been around for over 50 years. Recently brought to broad public attention by Marvel Studio’s Avengers Assemble and Avengers Age of Ultron, not to mention numerous blockbusters celebrating the team’s individual members and TV shows like Agents of S.H.I.E.L.D. and Agent Carter, “Marvel’s premier Super Hero Team” has seen a renewed surge in popularity outside the circles of comic book enthusiasts.

For all those not quite familiar with decades of Avengers history, the group’s various factions, incarnations and storylines, Marvel’s The Avengers Encyclopedia offers a comprehensive overview. The book covers the genesis of the team, its individual heroes and their allies and foes, as well as summaries of 20 decisive Avengers storylines. Richly illustrated with comic books art, it profiles over 250 characters, their biographies and powers, and well as more than 40 teams.

Rather than listed alphabetically, characters are grouped together according to the nature of their superpowers. Short “data files” provide core facts like the character’s real name and occupation, and there are boxes listing friends and foes, as well as details on some characters’ different incarnations. Naturally, with a cast of over 250, not every superhero gets the same attention or level of detail. However, the best-known individuals (such as Iron Man, Captain America, Thor and the Hulk) get several pages each. The lesser-known (and stranger – dare I say more absurd?) characters (like Squirrel Girl!) are grouped together with data files and short biographies for each of them. Following each character section are storyline summaries, introducing the reader to the various histories of the Avengers.

For seasoned Marvel veterans, The Avengers Encyclopedia may be an welcome addition to their collection, for anyone looking to find out more about the history of the Avengers without reading every related comic book from the past five decades it is a very good starting point – especially as the number of films surrounding the group’s various members continues to expand and audiences keep being introduced to an ever larger set of heroes and adversaries. At £12.94 this richly illustrated, heavy volume is definitely a bargain.