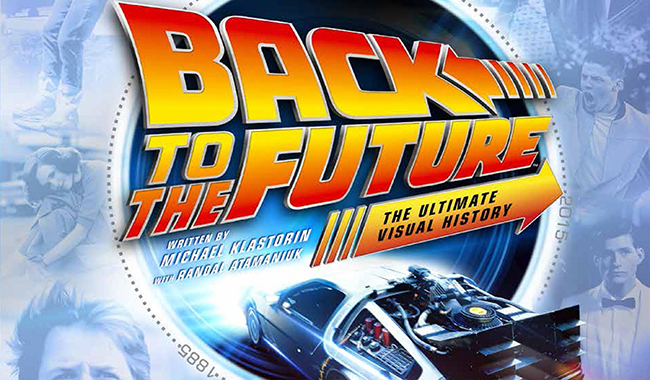 Back To the Future: The Ultimate Visual History

At the start of the book there are very kind, and often amusing words from the likes of Michael J Fox, Christopher Lloyd and co-creator Bob Gale (Robert Zemeckis provides the afterward at the end).

This hard cover, heavy, dense volume is about all you need to know on the series including looks at game, attraction and even cartoon spin-offs from the series.

Yes they have gone to lengths to provide fans with posters, letters, photographs and general reproductions of props from the film… The Letter Doc Wrote to Marty from the old west, That family photograph with the disappearing brother and sister, the high school tardy slip handed to Marty at the beginning of the first film from Principal Strickland, Biff dollars from the alternative 1985, and even a Jaws 19 poster at the back!. There are just a few of the joys you will find throughout the book as you read through the impressive visual history.

The films may go back and forth through time, but thankfully this book runs through the films in a more linear sense.

Anyone remotely interested in seeing more photos of Eric Stoltz on set will have plenty to gawp at here. And it’s kind of amazing just how much material they had already filmed with him when you see the variety of scenes that he is in.

The introductions and prefaces make it clear that the main author Michael Klastorin is the man for the job, and with his onset access for a large portion of the trilogy it makes sense that he should know his stuff. The book has been in the offing for some time now (amazingly getting turned down by publishers who thought there was no interest in the subject matter?), but it is amazing that time has indeed come full circle for this book to be released in conjunction with the infamous 2015 date that the characters soared to in the sky at the end of the first film.

Titan Books have done a bang up job on this release and it’s quite simply worth every penny!