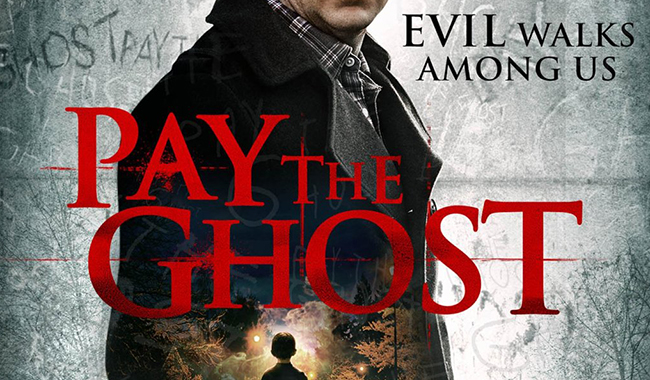 The last time Nicholas Cage confronted missing children and pagan lore, things turned out for the hilarious. It’s important to get the inevitable Wicker Man comparisons out of the way, because Pay The Ghost is very much its own movie. Unfortunately it’s not a particularly interesting one.

Cage portrays likeable college professor and family man Mike Lawford, who’s whole world is turned upside down with the disappearance of his son Charlie (Jack Fulton) during a Halloween parade. Fast forward a year, and Mike finds himself estranged from his wife Kristen (The Walking Dead’s Sarah Wayne Callies) and increasingly desperate to find their son. A string of visions throw the couple back together; allowing them one last chance to recover Charlie from the nightmarish realm he’s been banished to.

Pay The Ghost is curiously disjointed. The first half hour or so shows some promise. Scenes between Callie and Cage express the hell of a missing child reasonably well. An atmosphere of restrained tension and chilling imagery suggests a more psychological approach to the story. However, an increasing reliance on jump scares and plot convenience shakes everything up, rapidly diminishing the story’s power.

Certain themes are introduced and go nowhere. Exposition isn’t dumped on us, so much as it’s waiting with a flashlight and some complimentary peanuts. It’s often unfair to call out poor CGI in comparably low budget films, but this allowance hinges on the quality of storytelling and performance. The effects in Pay The Ghost are shaky and nowhere near as punchy as they needed to be.

It’s difficult to be annoyed or frustrated by this film. It’s instantly forgettable, like the DVD edition’s sole special feature: a brief, by the numbers behind the scenes featurette. Regrettably the whole experience of Pay The Ghost is bloodless and a waste of potential.