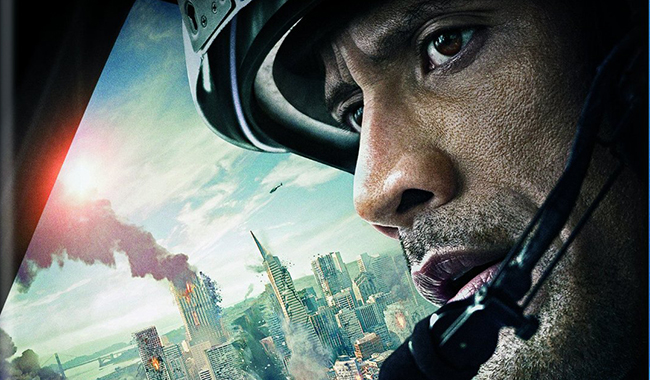 It seems the world is coming apart on us once again – this time the west coast of America (Always a popular holiday spot for natural disasters) in this big budget blockbuster.

Well it seems that disaster movies have not gone out of fashion just yet, but San Andreas certainly isn’t interested in bringing anything new to the table to keep consumers hungry for any more.

On the one hand you have your rescue hero (Played by The Rock) who is quite happy to abandon his job as rescue pilot in order to focus purely on saving his ex-wife and his daughter. But don’t expect the film to raise questions about the moral implications of any of this. In fact the only person put under the moral microscope is the boyfriend of the ex-wife who without much warning goes from – fairly sympathetic, but busy businessman to disposable douche-bag in the course of one scene.

On the other hand you have reliable scientist people (Hello Paul Giamatti) who are here to explain to everyone – including YOU the audience member, just what is going on.

Cue the earthquakes, queue the aftermath disasters of the disaster and you are set all set for some of the most appalling CGI in recent cinema history.

I guess this one is intended as a rollercoaster of a ride, but to be honest there are so few characters that you get to know, and it’s an extremely bloodless affair that when people are consumed by the chaos around them that they barely register, leaving you with a core set of characters finding their way to each other. Do you care really?  No. Are any of them entertaining? Well yes The Rock is always a pleasure to watch. But beyond that – this is as disposable as any film that looks like a Roland Emmerich movie can be.