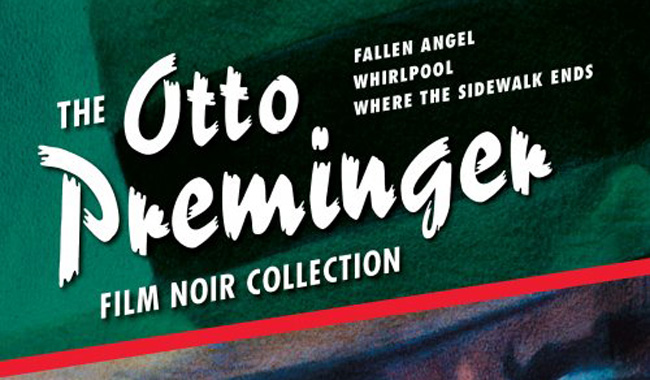 Perhaps a better suited title to this set of three films would be ‘The Otto Preminger Film Noir Collection’ but I guess with the absence of the key film in his film noirs, Laura (1944) that would be incomplete. But these were not Preminger’s only film noirs. Yet like many of the directors of film noir Preminger was a Germanic Viennese exile. The label or sub-genre of film noir was not given such a label until later by the French cineaste intellectuals who write about what constituted a film noir. It will come as no surprise that moody black and white and chiaroscuro lighting contributed to the look and style. The German directors who paved the way included Fritz Lang, Billy Wilder, Robert Siodmak and of course Preminger (actually they were Austrian and not German but under the influence of Nazi Germany this was the same thing). As a result of their exile there was a good deal of cynicism that permeated these films including the films selected here. This is what makes the absence of Laura most obvious as this is considered his masterpiece and starred two actors who would also appear on the films included in the box-set.

If there is a running theme in Preminger’s work its obsession. In Laura it is the obsession of a portrait of a woman, a man (Dana Andrews) believes is dead. This paved the way for the films included in the set, the earliest being made the year after Laura, Fallen Angel. Dana Andrews returns to a Preminger film to play a conman who has overrun the ticket on the Greyhound bus and is kicked off at a small Californian town one night. He alights bus and enters a café where local people including the café owner and a local police inspector (Charles Bickford) are concerned about the runaway waitress. She turns up the next day. Enter the cool and sassy Stella (Linda Darnell). The conman, Eric Stanton is enamoured by the girl and grows obsessed by her. He observes her stealing from the till and is at once smitten by her. After a short while he tries to seduce this cool tomato and asks her to marry him. But she’s not prepared to marry a two-bit loser. He proposes that he seduce and marry a widow (veteran Alice Faye) for her money, annul the marriage and run off with the waitress. So sets in motion the disasters ahead and though we might not what that it is we, know it’s going to happen.

The next film is arguably the weakest in the collection but is never the less still interesting. Whirlpool (1949) is Hitchcockian in style (indeed any one of these films could have been made by the master). It is about a kleptomaniac (Gene Tierney) married to a wealthy psychiatrist. When she is caught in a department store she is saved by a strange chatty man (Jose Ferrer) who has a creepy hold on her. He is hiding a past of his own and hypnotizes her in order to bend her to his will. When one day she is found at the scene of a murder she has no idea how she came to be there.

The third and final is the best of the three, Where the Sidewalk Ends (1950) once again starring Dana Andrews. He is at his nervy, square jawed best here as Detective Mark Dixon a detective on the edge – his father had been a violent criminal and he is aware that he is only just on the right side of the law with his own violent past having previously been investigated for a violent attack against a two bit hoodlum who he once again finds himself up against. Dixon is called in to investigate a murder in an illegal gambling joint. The game is between his previous trouble, Scalise (Gary Merrill), a tourist who wins a pot of money and another cheap crook who becomes angry when his ex-wife (Gene Tierney again) wants to leave when he is losing. A fight ensues with the man striking his wife as she leaves and the tourist getting stabbed to death. Dixon believes that again Scalise is involved but has to prove it. When he tracks down the angry man in his basement apartment he unwittingly kills him. Instead of fessing up he covers his own tracks and tries to hide this from the man’s ex-wife but of course lives with guilt and fear of being caught. Of the three the latter one is the most tense.

Preminger’s film noir career did not begin with Laura and end with Where the Sidewalk Ends; he made many others including Angel Face (1948) starring Robert Mitchum and the gripping courtroom thriller Anatomy of a Murder in 1959. All three of the films have been released by BFI and here they have been handsomely re-packaged by the label with an attractively illustrated cover and a worthy booklet inside. An attractive one to look out for and probably deserved a film or two more.