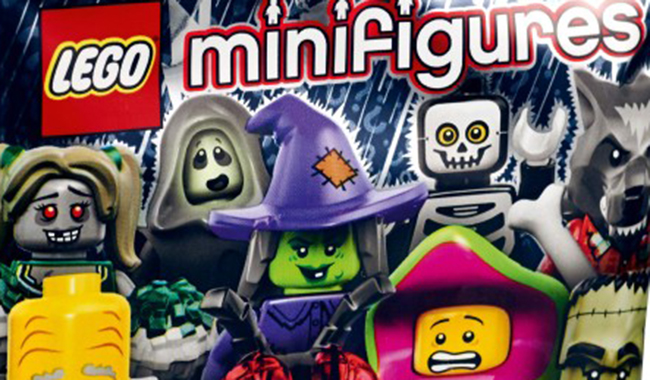 Sheet with pictures of all the minifigures in the series

The Lego collectable minifigures keeps rolling on with Series 14 now available. This time, rather than the usual mix of characters, for the first time we have an overall theme for the series of Monsters. With Halloween on its way, what better time to have a look at what the series has to offer.

Obviously Lego has released many sets and series where these monsters and various monster costumes have been included. However, as ever, all the figures in the series are unique. We do get some figures that are very similar or using the same moulds such as the Square Foot essentially being a brown version of the Series 11 Yeti figure. Many of the figures feel very familiar but on closer inspection, all the figures have been seriously upgraded and lovingly detailed to serve as upgrades over anything previously released.

As ever, the price of the blind packed bags and the size of the line up is the same as before. At £2.49 they are certainly cheap enough to keep collecting despite the obvious issues with duplicates that come with these kinds of collectables. The 16 figure line up is also a good size, so that it is not too difficult or daunting to collect the entire series but still large enough to keep it interesting.

For review purposes 10 random bags were opened. From the 10 bags we received 6 different minifigures and 4 duplicates. From a selection of 16, I might have hoped for maybe 1 more different one, but all in all this still seems pretty reasonable.

As mentioned above, the minifigures really do look excellent as ever. The detail in the clothes and faces of the figures is just about perfect with lots of detail but not too much to make them over busy. The faces are still derivative of the classic yellow smiley look, but with modern levels of detail as well as different colours being used. Crucially this means that they are not trying to be realistic like with many of the licensed sets and this is where Lego design really excels.

As expected, there are many funny details on the figures such as the big foot character being called Square foot presumably due to the fact that the design feet are not exactly big, but they do have a square footprint. My favourite ‘easter egg’ is probably the fact that the Wolf Guy seems to be the Series 5 Lumberjack turned into wolf. The clothing he is wearing is a ripped version of exactly the same as the lumberjack down to the fine details. Another funny touch is to have included the Skeleton Guy who clearly isn’t a monster, but a normal Lego character wearing a skeleton suit for Halloween including a nice pumpkin bucket for sweets.

There are many very interesting figures in the line up that I like very much. The Zombie Business man is a funny twist on the normal hard working Lego business man, The Gargoyle is a massive improvement over the old version and should be usable in many different contexts, while the Fly Monster has an incredibly detailed moulded head that definitely deserves to be part of one of the space lines. A special mention can be given to the two ghostly characters, the Spectre and the Banshee. These look really awesome based on the pictures, though I was unlucky enough not to get either one of them from my sample bags. In both of these the legs have been replaced by a sort of a stand that seems to work really well. This stand was used previously in the Ninjago Ghost Army as well where they had more of a flame look but again these are not figures that I have even owned.

The Minifigure series continue to be a great addition to Lego line ups. Not only do they add a product that can easily be bought from most supermarkets at a fairly low cost, but they also create a nice way of adding varying characters to existing collections and toy boxes.

The quality of Lego minifigures and their design really continues to be at the highest level it has ever been with new, never before seen designs popping up at regular intervals. There is no doubt that many of the characters in the line up have been seen before in one form or another, but Lego just keeps perfecting their look and therefore making them desirable for all audiences.

The Monsters Series is a refreshing new take on the normal City and historical figures that again offers something new. It will be interesting to see whether Series 15 will be themed as well or whether we are back with the mixed line up, but for now, the Series 14 is definitely worth spending a little money on if you are a fan of Lego minifigures.