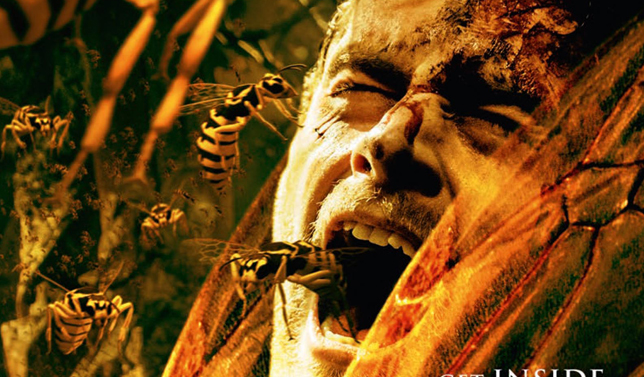 ‘Endearing’ is not a word you would expect to use when discussing a film about giant mutant wasps. There is, however, a lot to love about the debut feature of German director Benni Diez. Fast paced, inventive and well executed, Stung is a lovingly crafted homage to the gleeful monster movies of the 1980s.

In terms of plot, Stung doesn’t screw around. A small catering firm, headed up by Julia (Jessica Cook) and her sole, aimless employee Paul (Matt O’Leary), arrive at the mansion of neurotic billionaire Sydney (Clifton Collins Jr). His tedious garden party for local luminaries (including Lance Henriksen’s entertaining, alcoholic mayor); is pepped up enormously by a swarm of bloodthirsty wasps. Forced inside, their small band of survivors must fight their way to safety.

Stung works because it’s both conscious and proud of it’s B-movie heritage. It plays to it’s strengths – the story is ridiculous, which allows it to plough a rich furrow of dark humour. Every joke and wry aside lands, and some of the outlandish effects and deaths are impressive and imaginative. The film relies on practical special effects augmented by CGI rather than dominated by it.

The film owes obvious debts to 80s action horror such as The Thing and, most tellingly, Aliens. In many ways Stung hits every one of the latter’s notes; which makes Henriksen’s involvement all the more magical. It’s not afraid to go dark and get brutal, which further demonstrates how much respect is shown to a story which is, ultimately, really silly.

The DVD edition features several cast and crew interviews, and an interesting and engaging ‘Making of…’, which demonstrates what a rewarding experience the production was for all involved.

Stung is well worth your time and money, especially if you’re planning a film night with friends. And thanks to the finale’s confident sequel bait, there’s the promise of more joy to come.