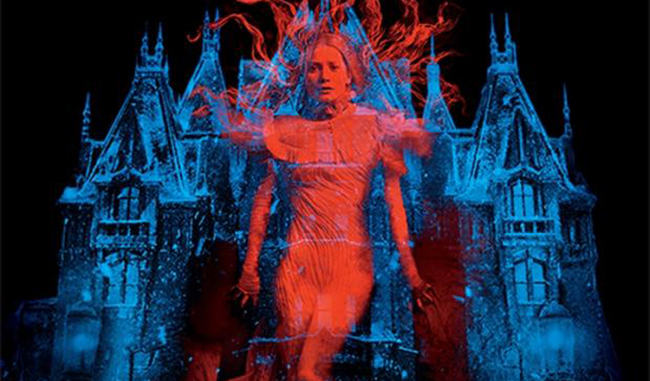 Guillermo Del Toro is handed a budget and let off the leash once more into a world that he high above others sits so comfortably. And yet all is not as it should seem in this gothic horror.

Worried spinster/novelist in the making (and daughter of a industrialist) Edith (Mia Wasikowska) finds herself charmed by visiting nobleman Sir Thomas Sharpe (Tom Hiddleston). Despite her father’s objections she finds herself romanced and whisked away to live with Sharpe along with his sister Lucille (Jessica Chastain) in England. But Edith is a woman haunted by ghosts, and the spirits of the place she finds herself in and literally dragging themselves up through the floorboards.

This would all be great if Del Torro focussed a little more on what actually makes an audience respond. If we have learnt anything in recent times it’s that good solid hard objects on screen make much of an impact that any CGI trickery. Sadly the ghostly work on show here is all rather a bit transparent and effect-less.

The film trips itself up every now and again in the editing of one scene to another making it appear rather amateur in places.

As for the director – Del Toro has finally gone the way of Tim Burton and is now just churning out repeated tropes fans of his work will find familiar in a slightly watered down Hollywood big budget period ghost story.  I have never seen so many over-used tropes in a movie and frankly surprised he decided to employ half of them. More often than not any scares that happen are shoe-horned in as movies often dictate you need to have a scare in there, even if the story does not require it. Crimson Peak is full of them.

The chemistry between the three main leads was ok at best, but sometimes suffering. Hiddleston was present, but his character severely underwritten in the films second half. Chastain was far too present and severely over written, leaving Mia Wasikowska on similar ground that she has treaded already in the likes of Stoker.

The script bares itself a little too early by trying to play too many a familiar trick on the audience. Sadly this backfires giving far too many answers to any mystery on screen right away. Once you have the plot figured out in your head it becomes a rather impatient waiting game for the film to catch up with you, and when it does it’s another case of “count the trope” until it reaches its ending.

The production design was great but everything seemed very much to be in the background. The lighting was perhaps the biggest offender. You will have never seen so much forced green and yellow lights since the SAW sequels.

The film has some strong violence and blood, and again the practical stuff stands out string compared to the weak CGI. But also showing that Del Toro is resting on his laurels you can clearly see some of the ghost designs are clear redesigns of creatures we have seen before in his work like the feast beast in Pan’s Labyrinth and even the Death caricature in Blade II. Del Toro has far too much love for the same attributes, shapes and oh god the bloody insects!

We can’t say that Crimson Peak will make anyone feel hugely let down by Del Toro, as Pacific Rim already has that honour. But this may crush any dreams he has of making any further off-kilter movies if it bombs. A huge waste of an opportunity masquerading as “homage.”