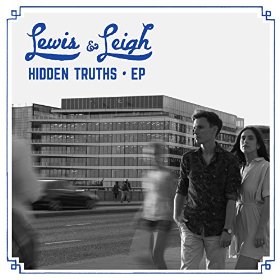 If you happen to have thirteen minutes or so to spare there aren’t too many more pleasant ways to spend the time than with this gorgeous four track EP. Talented transatlantic duo Lewis and Leigh have developed their own form of roots music that they call Celticana – and it is quite beautiful.

To explain: Al Lewis from Wales and Alva Leigh from Mississippi first met in London through a mutual friend from Nashville. Some initial casual songwriting together has now resulted in three EPs and a full length debut album is expected early in 2016. The music is slow and passionate with clear influences from the worlds of folk, blues and country. The rhythms are varied, the melodies lovely and the vocal harmonies quite sublime.

The four tracks on this EP are all different, but each follows the winning formula of fairly simple and subtle instrumentation backing two fine vocal talents. Alva and Al take turns singing the lead parts, her voice expressive and beguiling, his smooth and mellow. And when they come together the result is stunning.

Opening track Heart Don’t Want sees Alva’s slow vocal open a song of love that doesn’t quite work and it develops into a soft and tender track. Only Fifteen tells of an adopted boy finding his birth mother who was forced to give him up by her family. The duo play out the parts and the result is an emotional and yet uplifting song.

The acoustic Americana love song Please Darlin is delivered with real style and yet more beautiful vocal interplay. Closing track Country Comfort is an Elton John cover, from a country rock album he apparently did way back in 1970. The L&L version is slower and has more of a pure country delivery, with Alva Leigh’s vocals particularly standing out.

Lewis and Leigh have a sound that draws from a number of different influences to produce something that’s both beautiful and inspiring. This third EP shows their growing songwriting abilities too, and their debut album is really something to look forward to.