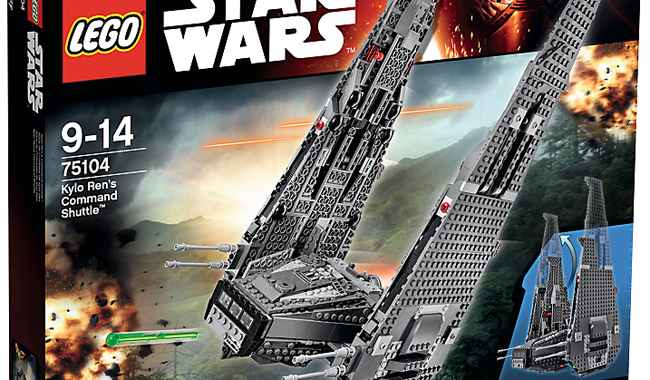 With the arrival of the new Star Wars movie, Episode VII – The Force Awakens this December, it comes as little surprise that the Lego sets related to the movie are also now available in time for Christmas. The problem with these early movie related releases as ever is that almost nobody really knows what we are looking at and the characters and vehicles are still strange to us, making it hard to come up with any kind of view on how successful Lego has been at recreating them. The added problem is that Lego has had to design these sets even further back in time, meaning they must have been working off concept art and whatever story content has been released to them at the time. This can lead to odd sets that relate to perhaps cut scenes and characters or things that have just been misinterpreted due to the lack of source material.

Kylo Ren’s Command Shuttle unfortunately does seem suffer at least from the latter. In the third trailer for Force Awakens, you can get a glimpse of this Shuttle from behind heading towards the Star destroyer and the wings are in a V shape rather than the vertical position of the Lego set. Luckily, this is Lego and the fix is certainly within reach of most Lego builders.

With most Star Wars sets the minifigures are certainly one of the biggest draws of the sets. With the new sets, we have certainly seen images of some of the characters but it is still difficult to establish exactly which characters are important and which are just in the background of the movie.

What is clear is that Kylo Ren certainly appears to be the main antagonist of the Force Awakens, at least to the extent that Dart Maul was for Episode I. We get another red lightsaber wielding Sith, this time with a novel light crossguard. The minifigure Kylo Ren comes as usual with a very much oversized helmet design. This does look way out of proportion, but then so do Darth Vader or the Inquisitor’s helmets. This time, Lego seems to have hedged their bets though and also printed the head piece with a similar design. In the trailers so far, we never see Kylo Ren in any other form than with his helmet, so I would assume that this is just to enable an alternative look with the hood piece also included. I think the figure looks better with the regular printed head and hood combination but this could change once we get more familiar with his look in the film(s). The new look lightsaber has also been recreated with what is to me at least a new part. Effectively it is just as you might expect a translucent stick piece with a cross shape at one end. While it does not exactly replicate the lightsaber in the film, where the crossguard starts from the hilt, for Lego the look is perfectly fine.

General Hux is the only other named figure in the set. The General also appears in the various images and trailers that have been released, and luckily for Lego his appearance is a very plain black Imperial uniform with a long trench coat reminiscent of all those classic Nazi bad guys of cinema. The look that Lego have gone for is from the parade scene in the first trailer which is the only scene where I have seen General Hux wearing the hat that he comes supplied with. Otherwise the all black look has been well captured. The ginger sideburns have been overstated in a typical style for Lego and the three stripes on the arm of his coat have not been replicated, but overall the figure looks a perfectly reasonable rendition of the character we have seen so far.

The First Order Stormtrooper Officer is the same as the new style storm troopers in other sets, but comes with a nicely detailed shoulder pauldron. Overall the new design Stormtrooper looks very nice in my opinion. The helmet design looks modern and minimalist while still retaining the traditional Stormtrooper look.

The female First Order Officer has the hallmarks of one of those figures that might not even appear in the films. We get a fairly plain gray imperial uniform with a nice silver buckle and the same hat as General Hux but this time in gray and black colour. Interestingly the design of the uniform is slightly different from the Male First Order Officer that comes in the First Order Special Forces TIE Fighter set (75101) so both figures are unique not only by the heads that have been used.

Finally we get two First Order Crew Members. I don’t think these have been shown in any images from the new film so far, so these might be based on some concept art. The figures in general remind me of the Death Star Gunners who were also in all black with over sized helmets. The helmet design is certainly odd, but we’ll have to refrain judgement on these until we see what they look like in the films. One interesting thing to note though is that the two crew members have been made different ethnicities, so we get one white and one black head. This is a nice touch even though you can’t really tell from underneath the helmets anyway and certainly should be encouraged going forwards.

The build of the shuttle is pretty interesting for a standard Lego model. While the overall design is symmetrical and roughly follows the TIE fighter overall H shape, each of the sections is filled with interesting features and designs.

The build starts with the central section which is very well designed. For once we actually get a cockpit that is large enough to have several minifigures in there, with enough room to have them in standing positions. We also get a pilot’s seat built from bricks which looks excellent as well as some hooks where various weapons etc can be stored during flight.

The exterior of the ship itself is also very nice. While I have generally felt that the Imperial vehicles’ gray, gray and more gray designs can be a little boring to look at, in this occasion Lego has done a good job in using the black, dark gray, light gray and silver/metallic pieces to give good variation and detail to the ship. The silhouette of the ship is still odd looking as we have yet to get a good look of the ship in the films, but overall the design is nice and rugged. The top of the cockpit opens up on a hinge giving good access to the interior. In addition, the rear floor of the cockpit hinges down to form a ramp. While this is a nice idea, the ship does not come with any landing gear and as a consequence sits very low to the ground, thereby rendering the ramp slightly useless.

The wings of the ship in full flight mode are impressively large. The wings in extended position make the ship about 16 inches tall. In addition, Lego have added a very clever folding mechanism reminiscent of US Navy fighter jets on aircraft carriers where the wing can be folded over to save space. This can be manipulated with a simple winch mechanism from the back on each wing separately and it works remarkably well without feeling too flimsy. I doubt the wings fold in this way in the movie, but I could be yet proven wrong on this.

The final point worth mentioning is the wrong alignment of the wings. In the trailer the wings are quite clearly in a pretty wide V shape, though it must be noted that Lego hasn’t been the only one getting this seemingly wrong. The Disney Die-cast model of the same ship also has the straight wing shape, so it is possible that either the wings alignment moves in flight or that there was a fairly late change in the design to the concept art used. Whatever the background to this, the ship does look even better when the wings are swept to the V shape. There are already several modification guides available on the internet and on YouTube, so this is definitely a recommended exercise for anyone who wants to improve the look of the set. The complexity of the modifications varies from detailed and complex solutions to very simple ones, so it is definitely worth looking around at the various pictures to see which one you prefer.

The first wave of Lego sets based on a film that no-one has yet seen is always questionable in its value and accuracy. The minifigures are not yet of known characters so there is no inbuilt desire for these either. However, this is Star Wars we are talking about. For one summer in 1999 at least, Darth Maul was everywhere before the backlash to the prequels truly took hold. In a similar manner, I fully expect that Kylo Ren in particular will be a very important character to us and therefore a minifigure to have in your collection. He is exclusive to this set for now, so that definitely adds to the value of this set.

The ship does appear to be designed slightly wrong compared to the film, though this could yet change. But in any case, I do think the design is nice and taking on the modification project is actually one of the best Lego moments I’ve had in a long time. Lego really is for design and experimentation, and moving away even slightly from the instructions does remind you exactly why Lego has always been so important as a toy. While the potential error can’t be seen as a bonus for the set of course, it does present us with an opportunity to fairly easily to accomplish something special that is nowhere near as daunting as trying to create something from scratch for example.

As a play set, the Command Shuttle works pretty well. The wings in full extended position are large and perhaps a little fragile, but overall the set feels solid enough and has plenty of play features and access where it matters.

As a display set, the wing modification definitely seems a must for the moment at least. When modified the ship will take a lot of space compared to some more obvious display sets so you might find the shelf space hard to justify. However, it is still a very good looking set so it is not out of the question even if it is not quite the purpose it was designed for.

At £100 retail price the set certainly is not cheap and there are some cheaper alternatives in the line-up that might end up being just as popular. For example the First Order Transporter seems easy to recommend. It comes with 7 minifigures including the cool silver coloured stormtrooper Captain Phasma and a nearly 800 piece ship for £80 which seems like a decent option. However, the ship is not as good looking and you are mainly getting a lot of unnamed ‘army material’ in the form of various stormtroopers and two Resistance soldiers so the choice is not quite as clear.

All in all though, the Kylo Ren Command Shuttle can be recommended as a nice alternative at the top range of the new Star Wars line up particularly if you already own one of the previous versions of the Millennium Falcon.