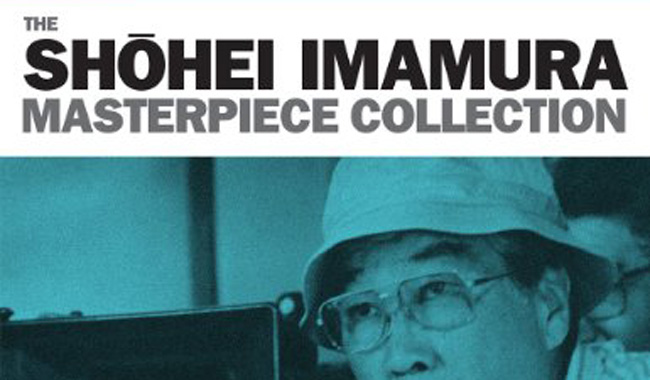 The collection of films on this latest box-set from Eureka! Master of Cinema is not a new release of previously unreleased films but a re-packaging of all the released Imamura films on Eureka! with the same extras. Never the less it is good to have this selection of films representing his career in one package. Previous to the Eureka! releases knowledge of Imamura was largely confined to The Ballad of Narayama (1983) and The Eel (1997), the latter not released as a part of this box-set unfortunately, but all big critical successes and winning the Palme d’Or in Cannes.

His career spanned from 1958 to 2002 when he directed a segment for the portmanteau film 11’09”01 – September 11 until his death in 2006. Included on this collection are eight of his films that strongly represent his career. Starting in chronological order are two of the first three films of his career: the (slim at 52 minutes) comedy played to and based off a western influenced jazz pop song by then popular Japanese singer, Frank Nagai which is a very strange curio if not that good. In the other film from 1958 we start to see a pattern emerging that I will come to later. In Stolen Desire we follow a theatre production company that alternates its acts between traditional Kabuki theatre and strip shows. Although not a film with much in the way of strong drama it is interesting to see where the director was heading and how daring he could be with his material, displaying the animal nature of human behaviour. Both these films are a long way from his work as assistant director for Yasujiro Ozu’s real-life dramas.

The next two films collected here continue this theme with Pigs and Battleships (1961), a fairly light hearted gangster film that displays the problems ordinary working-class urban folk had with the American occupiers after the war. The film focusses on an underground and underclass who make money on the black-market as young hoodlums seek opportunities to make money by pimping and selling on the market to the American GIs and sailors on shore leave. It centres on one wannbe hood, a teenager who is caught between his sensible girlfriend who wants to settle down and willing to help the mob by looking after their pigs, a job he is proud to carry out. The next film was made two years after and is called The Insect Woman. This is still an undiscovered masterpiece of storytelling. Epic in ambition and scope it follows the travails of a peasant girl from her birth to her death and the struggles that made her from a survivor to a hard woman seeking to find her reward in life. The film begins with Tome’s birth with her mother in labour and the baby’s father questioning her as to who the real father is. At first we are shocked at this interrogation but soon learn that the mother is a woman who likes to put it about somewhat and is indifferent and soon grows jealous of the child’s relationship with the father. Tome even grows up to adulthood sleeping with her father where incest is more than just hinted at but almost seems acceptable. Tome grows up a survivor to hardship and cruelty and has a daughter which her own mother plans to kill at birth because it’s another hungry mouth to feed. (More incest as the father now helps to feed off his own daughter’s breast milk.) When she has enough money Tome makes her way to Tokyo where she becomes a prostitute before becoming the Madam of her own bordello. The Insect Woman is a no holds barred film that is cruel and harsh in which the director once again demonstrates the animal instinct in human nature.

Along with Nisha Ginza Station, the 1967 documentary A Man Vanishes is the weakest film in the collection. It was in many ways a failed project that follows a man’s bizarre disappearance and is told as  police procedure but fails to provide any solutions and rambles on somewhat. The next film is the first here in colour. It is called the Profound Desires of the Gods (1968) and is about a clash of cultures on the isolated island of Okinawa. On the one hand there are the inhabitants, a simple primitive people who practically live in the Stone Age.  Their lives are disrupted with the arrival of men in suits who have come to drill a well to provide power to a nearby sugar mill. It’s a long film at almost 3 hours but worth sitting through.

Throughout most the 1970s Imamura concentrated on making documentaries that mostly covered social issues or about prostitution. He was lured back to make feature films with Vengeance is Mine (1979). This film is the other unrecognised masterpiece on this collection and like The Insect Woman is a thoroughly engaging film about a serial killer. It is one of the best on this subject and would remain so until Henry: Portrait of a Serial Killer (1986). The film is about the real life serial killer Akira Nishiguchi (called Iwao Enokizu in the film) and follows the facts of the case much in the way Imamura had done with the documentary A Man Vanishes. In 1963 Nishiguchi killed a series of people and went on the run for some 90 days evading capture when he is caught by the police after he murders a his hotelier girlfriend who was also a procurer of women and her ex-con mother. The lead is played by Ken Ogata who would go on to appear in The Ballad of Narayama is brilliant, cruel and, well …an animal who kills without much remorse but kills from a deeper instinct.

The final film is The Ballad of Narayama. Previously filmed in 1958 as a Kabuki stylised piece of filmmaking in which the sets drop away, this film is set in an isolated rural mountainous village in which the small community follows a ritual that when the elderly reach the age of 70 they are taken by the eldest son and sacrificed to the Gods by being left to die at the top of the Narayam mountain. Different in the way it was shot to the 1958 film, Imamura intercuts scenes of the beauty of nature as well as cruelty whereas the people are filmed merely as cruel an animal-like, almost indifferent to the death of a dead baby found by a river; the scenes of mass skeletons of the previous elders on the top of the mountain is particularly impressive. Shot and made over a four year period, the by now veteran director made his career live like the characters in the film in the mountainous region to capture all four seasons of the year giving it an added realism. Seeing it on DVD/Blu-ray is definitely preferable with this film than seeing it in previous VHS versions.

As can be seen the running thread through these films is the animal nature of humankind, highlighting this through those who live on the margins of society and therefore seeing Shohei Imamura’s films as a body of work is interesting rather than individual pieces. He is most definitely a director I would like to pursue further and applaud Eureka! for having the foresight in re-packaging and putting this box-set together. A must see for any collector or those interested in Japanese cinema.