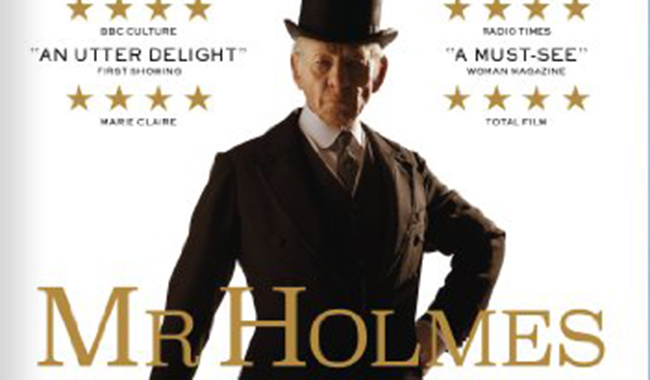 Since the early days of cinema there have been interpretations of Arthur Conan Doyle’s eponymous character of Sherlock Holmes. They have gone from traditional tellings (Basil Rathbone, Jeremy Brett and Peter Cushing) to comedy (Buster Keaton and Gene Wilder), cyber-punk (Robert Downey Jr.), modern takes and settings (Rathbone again and Benedict Cumberbatch) as well as youthful fantasy (Nicholas Rowe in Spielberg produced Young Sherlock Holmes, 1985). In the latest film to add to the canon stars the always great Ian McKellen as Mr. Holmes in a new take on the fictitious character going even beyond Conan-Doyle’s invention. In Mr Holmes he plays a 93-year-old Sherlock Holmes who comes back home to his Suffolk cottage in 1947 to see out his remaining days and to tend to his beloved bees. He has just returned from Hiroshima where he has heard of a replacement to Royal Jelly with the Hiroshima ash – later realising this to be bogus. Back home he befriends his housekeeper’s (Laura Linney) young son Roger (Milo Parker) much to his mother’s chagrin (Mrs Hudson has long since died as has Dr. Watson). In his Sussex cottage Roger helps the elderly Holmes tend to his bees and tries to learn from the older man whom he treats as a kind of surrogate grandfather (roger’s father had been killed in the war. But secretly the once great detective Sherlock Holmes is showing signs of dementia – he fails to remember people’s names and is requested by his doctor to mark in a diary every time he goes blank (if he remembers that is). What is also troubling him is a case dating from the 1920s which he felt he had failed leading him to retire from being a detective. In this particular case a man had arrived at 221b Baker Street to investigate the man’s wife who has become obsessed with playing a glass harmonica to the point that she was going crazy following several miscarriages. He also believes that she is trying to kill him. Holmes also believes this and persuades her to do otherwise. He was wrong; she was trying to kill herself and later succeeds. Sherlock Holmes is haunted by these events and certain gaps in his memory. He keeps memento mori from the case that draws him back.

Falling into the tradition of Heritage Cinema, this is a slow moving and at times haunting film. Needless to say McKellen’s performance is outstanding as he has aged make-up on to make him look a good deal older. This is also not the first time that McKellen has played a former big shot who is living the life of a retired recluse. He had previously played scandalised homosexual Hollywood director James Whale, a director of some of the best horror films in the golden era in Gods and Monsters (1998) in one of his key screen performances.

There is a certain cheek to Bill Condon’s film though. When asked if he wore a deer stalker by an elderly woman in Japan he replied that this was the work of Dr. Watson’s fiction stories of cases they were on together. She is disappointed to hear this. Elsewhere, Roger asks if he ever smoked a pipe, to which Holmes replied no, he preferred cigars (we later learn that in the earlier days he did indeed smoke a pipe), playing with the many interpretations of his character. For many the film may be slow going with little of the crime mystery one would normally expect. His investigations and elementary deductions rarely appear but when they do they feel like parody until the end when young Roger is almost fatally stung and Holmes uses deduction to uncover that this is not the work of his beloved bees but instead the work of wasps.

It is fairly certain that Mr Holmes is not the last word on Sherlock Holmes and there are plenty of extras consisting of interviews with the cast and crew. Sometimes it is darkly filmed but is an interesting film and worth the time investment if in the mood.