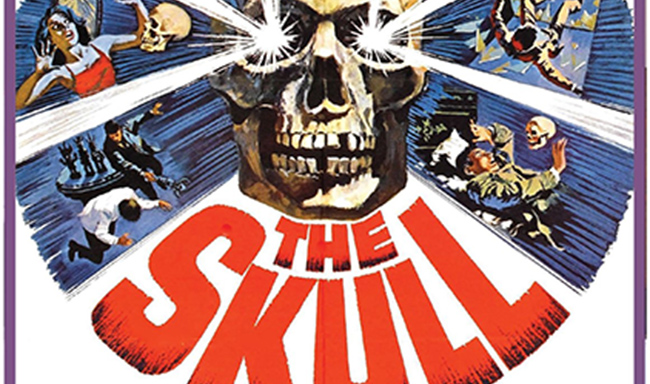 The latest release from Eureka! is a curious and interesting choice from a B production company rival to Hammer. It follows on from Eureka’s release of a slightly more obscure Hammer film, The Man Who Could Cheat Death (1959) last month. Amicus made some interesting films in the 1960s. The company was founded by two Americans who became the producers of all the Amicus films. They were Max J. Rosenberg, the money who based himself in New York and Milton Subotsky who did base himself in the UK and was the visionary man writer who created the style of Amicus. To the undiscerning eye there was little difference between Hammer and Amicus – often the same directors and cast. Where they did differ though was that Hammer, throughout most of the 1960s set their horror films in the Victorian or Edwardian period (although their Hitchcockian thrillers were contemporary) whereas Amicus set theirs in the present day (which was probably cheaper).

The story opens in the 19th century with a grave robber breaking into a windswept grave (a scene reminiscent of Italian gothic horror films) where a phrenologist gets hold of the head of the Marquis De Sade. It soon becomes apparent that the skull has powerful supernatural properties turning the person in possession of the skull into a murderer. In present day London a group of collectors gather at an auction including occult collectors Christopher Maitland (Peter Cushing) and Sir Matthew Philips (Christopher Lee). The two friends and rivals begin a bidding war with Lee paying over the odds for a set of demonic statues and not knowing why. Maitland, meanwhile, relies on a man called Marco (Patrick Wymark) to provide him with his no questions asked collectors pieces. One item he brings over for him is a bound book by the notorious Marquis, bound we are told in human skin (in the original source story we are told that this was the skin of a dead Parisian prostitute, but would have not passed the censors). After this the sleazy Marco tells him of another item he has in his possession – namely the skull of De Sade. It transpires that the skull has been stolen by Marco from Sir Matthew Philips. Philips advises that he doesn’t want it back and advises Maitland to get rid of it. But the occult collector does come in possession of it but not before its powers have killed Marco and his landlord. It soon begins to take over Maitland’s mind.

The Skull was made in 1965, the year after the studio’s first horror film (excluding the producer’s first foray into horror with City of the Dead, 1960 also starring Christopher Lee) Dr Terror’s House of Horrors, a portmanteau horror which also starred Peter Cushing and Chris Lee. The Skull is based off a short story called ‘The Skull of the Marquis De Sade’ by Robert Bloch, author of the book that became Alfred Hitchcock’s Psycho (1960) and other horror stories; a story that had been published in the pulp magazine ‘Weird Tales’ in 1945. The script remained faithful to Bloch’s story apart from changing the character’s names, nee improved on them. The problem with Subotsky’s script was that it was very thin and director Freddie Francis only had enough material for about 52 minutes and needed to pad it out. Normally padding does not improve a film but in this case, in Francis’s hands it made what could have been an average film into something better than average. For the last approximate half an hour there is virtually no dialogue at all but the floating and independent skull getting into Maitland’s head.

Freddie Francis was the director and was starting to become a niche director of British horror films. This was not a tag that liked although he had ambitions to be a director. Since the 1940s Francis went from being a camera assistant to a director of photography becoming a favourite of John Huston and Michael Powell’s. He won an Oscar as Director of Cinematography on Sons and Lovers in 1960. But in the early 1960s he began by directing a couple of horror films for Hammer and by the mid-late 1960s he became the premier director of horror films, a genre that he said he was never that keen on. What Francis was good at was making the very best with budgetary limitations and here does so very effectively. Cushing and Lee are as good as ever. The widescreen (better than the old TV screenings in a squarer format) makes good use of the image of the skull’s POV. True, the strings are visible on the floating skull but it is filmed and lit with a genuine sense of eeriness from an idea that could have come across as very silly. As with Eureka’s release of The Man Who Could Cheat Death last month, the image is a little grainy but the wonderful Technicolor is brought out to its best. There are two very meaty extras on the disc – namely 25 minutes discussions on the film by two of the most enthusiastic writers of horror films: Jonathan Rigby, author of ‘English Gothic’ and Kim ‘Nightmare Movies’ Newman.