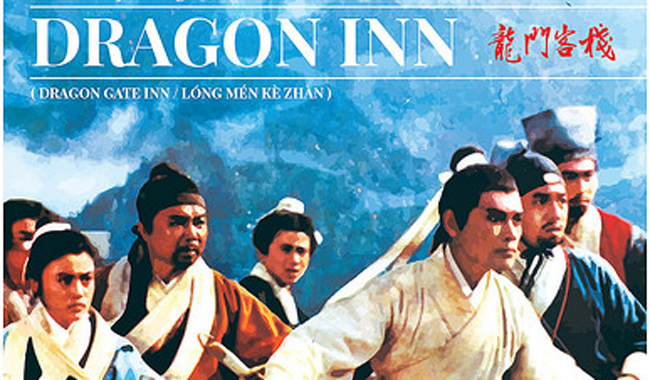 On initial viewing Dragon Inn (sometimes known in the West as Dragon Gate Inn) is a standard martial-arts film set during the Ming Dynasty. It has the standard over the top violent action and sword play of a ‘wuxia’ martial-arts film – that is a martial-arts film with a central hero character. Yet on closer inspection director King Hu has employed some interesting camera movements and allows the camera to play as much a part of the action the normally expected superbly choreographed fights.

The story of Dragon Inn centres on an inn in an isolated border region in eastern China during mid-Ming Dynasty. A eunuch, the first eunuch to the Emperor has killed a rival, General Wu. The eunuch, Tsao plans to have the General’s children and other family members killed as potential rivals and tracks them down to an isolated inn in said eastern provinces. The owner of the inn is also loyal to the former General while the Emperor’s guard plans to attack. For the remainder of the film there is a stand-off with many fight sequences between the supporters and family of General Wu and the Tsao.

For many years this film went neglected and unseen outside of the Far East. In 1992 a remake, New Dragon Gate Inn was released starring Tony Leung and Maggie Cheung two of Hong Kong cinemas biggest stars in the 1990s, followed in 2011 by a yet another version, The Flying Swords of Dragon Gate starring Jet Li, another famous martial-arts exponent. These versions gave the original film a renewed life. The film has also been restored and is looks good in widescreen making it look the freshest it has for many years. Set in one location the narrative of this ‘wuxia’ film is not too dissimilar to a Hollywood western, like say Howard Hawks’ Rio Bravo starring John Wayne. Indeed some of the style and the tracking shots are reminiscent of spaghetti westerns and in particular those of Sergio Leone. Hu’s camera direction moves with the action with the camera appearing to dolly track away from a figure running toward the action giving faster movement, as well as some tracking and moving POV camera movements that would not be out of place in a Hitchcock film.

Much of the film is otherwise standard ‘wuxia’/martial-arts film with plenty of swordplay, physically implausible choreographed action as well as stand-offs against the odds. Eureka! have stuck their necks out to include this in their Masters of Cinema series. King Hu is not a name directly associated with cinema masters and is perhaps best known for his 1971 film A Touch of Zen; he only really made a handful of films. He was a Chinese film director who worked predominantly in Hong Kong and Taiwan where he enjoyed freedoms as an artist away from Maoist China. The only significant extra is a discussion on the film by film historian David Cairns.