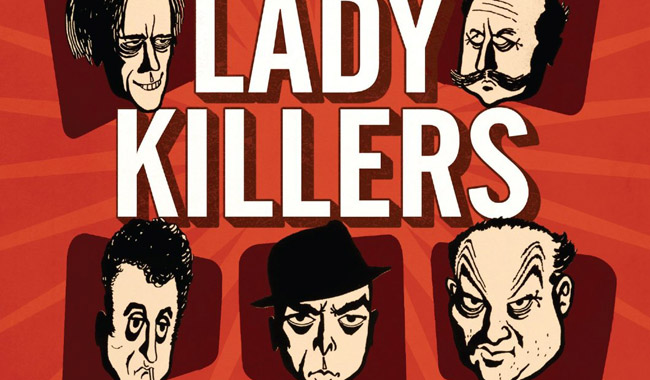 Ealing Studios in London are perhaps best known for their mid-century ‘Ealing comedies’, all full of black humour, top notch writing and an array of the finest character actors this country has ever produced. Many would cite ‘The Lavender Hill Mob’ (1951) as their favourite, but following close on its heels is the classic ‘The Ladykillers’ (1955). Directed by

Alexander Mackendrick and starring such talent as Alec Guinness, Cecil Parker, Herbert Lom, Peter Sellers, and the unsurpassable Katie Johnson, this clever comedy must surely count as one of the studios finest.

Like ‘The Lavender Hill Mob’, the plot is also centred on a crime, this time a mismatched group of small time criminals get their comeuppance after lodging with a sweet old lady and posing as a group of classical musicians as cover. When their elderly landlady discovers what is really in their instrument cases and vows to report them to the authorities, the criminals set about trying to prevent her meddling by bumping her off. Unfortunately for them, Mrs. Wilberforce and her parrots will not go easily! Alec Guinness as criminal mastermind and gang leader ‘Professor Marcus’ is suitably sinister and almost unrecognisable, as always, a real joy to watch at work. Peter Sellers in his first major film role also shines. But it is the wonderful Katie Johnson who will always be remembered for her clever and understated performance as Mrs Wilberforce, the films moral centre.

I adore this film, having grown up watch Ealing comedies as a child at home, so I must say I approached this with some trepidation as to what they might have done with it. I was delighted to see then, such meticulous and high quality restoration. The audio track is superb, and despite the Technicolor now looking somewhat ‘milky’ (my only criticism), the picture restoration is to be applauded for its quality and subtlety. The film is now a joy to watch and free from all the worst distractions of deterioration.

As such I enjoyed watching the ‘Cleaning up The Ladykillers’ featurette immensely. The Locations featurette (one of a handful of new extras) was delightful. As the film is well known for its Kings Cross location, it was so interesting to see those streets and how they had changed over the years. The addition of the ‘Forever Ealing’ documentary was welcome. Narrated by Daniel Day-Lewis (Michael Balcon’s Grandson) this is a lovely homage to the much loved studio and has some brilliant interviews with former cast and crew, notably those now lost, Sir John Mills and Sir Richard Attenborough. There is also a nice collection of film specific audio commentaries and interviews, and the inclusion of the original trailer. which we found hilarious. Overall it is a nice collection of extras, nothing superfluous and all enhancing the viewing experience.

‘The Ladykillers’ is sadly now often known by its disastrous Coen Brothers remake from 2004 starring Tom Hanks. Why oh why they thought that was a good idea I shall never comprehend.  Interest in the original was revived however by a recent west end musical adaption which was thoroughly enjoyable. One hopes that this restored blu ray and dvd release will bring the original classic to a wider audience in high quality, and give its fans a chance to see it in all its magnificence in a perfect copy.

In conclusion, my professional and in no way biased option is – Love, love, LOVE THIS!
Claire Hyypiä