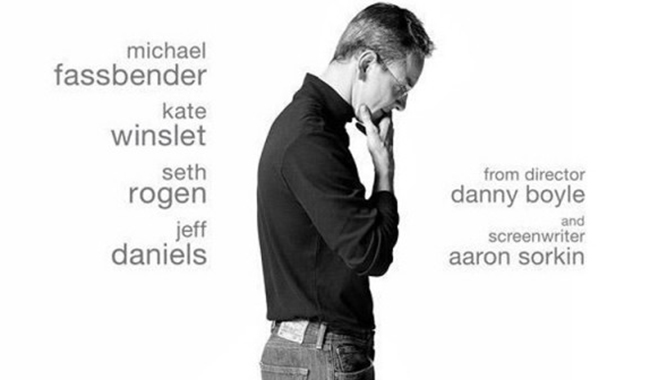 The film may have tanked in the US, butn with some luck Danny Boyles new film will do better business over here – and deserving of such as it is a high quality and very original drama.

The film takes a very novel approach to the biopic by focusing on three very different events in Job’s life.  The 1984 apple launch, the 1988 launch and then the 1998 launch of the iMac.

This three act structure is each divided up with conversations that jobs has with the same key people. His work confidant Joanna Hoffman (Kate Winslet); Steve Wozniak (Seth Rogen) the co-founder of apple inc; John Sculley (Jeff Daniels) The CEO at Apple; Andy Hertzfield (Michael Stuhlberg) a key member of the apple team; and his supposed daughter Lisa and her mother.

Watching his response to each of these key figures is simply a goldmine as tension is also mounting in the closing minutes as they head towards the launch of a new product and Jobs needs to take to the stage.

Michael Fassbender effortlessly slips into the role of Jobs; a man in relentless pursuit of perfection at the time he demands it.

The supporting cast are all very much there and the shared disbelief that each character displays as Jobs makes one unreasonable demand after another is part of what holds the chemistry of it all together, but Fassbender injects an earnest appeal for why he is making such demands and brings a rather heavy handed sense of logic to it making him seem very much in the right, but also very disassociated with the people around d him. This isn’t anything new when it comes to observing the antics of any business savvy “genius” as they seem to be a flock unto themselves – but Aaron Sorkin’s script cleverly taps into the human soul here without ever really feeling the need to soften up Jobs along the way.

This is a visually stimulating dialogue heavy treat for the eyes and ears featuring some of the strongest performances from the entire main cast in their careers to date.