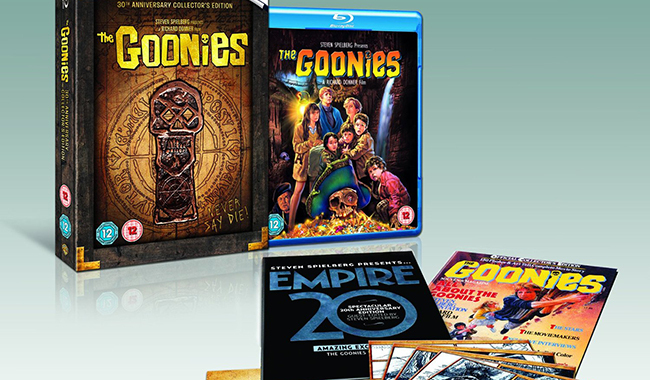 Anyone a big movie fan and not seen The Goonies. We’re sure they exist somewhere. Maybe you are in for a treat, or maybe you’re too young to be bothered with the nostalgia of an Era you are not entirely aware of.

Either way – we’re not going to trawl through the plot of this one. We’re done our retrospective podcast on the film which you can find in our Podcast section (Episode 174). Instead we’re going to simply talk about whether this release is worth buying, or buying again!

Let’s be very clear – this disc carries over (and looks pretty much identical to the last Blu-ray the released.  The commentary recorded with the cast and director is present, the making of material, the deleted scenes. It is all here with nothing new added for this release.

So what does stand out in this larger box? Well you get a 3 new items to ponder.  A set of 10 cards featuring storyboards from certain scenes (or deleted scenes) from the film. They are printed on both sides and feature some nice details about this aspect of the production design when the mind pushed the pencil.

There is also a short (in fact rather flimsy) reproduction of an Empire magazine interview with the gang from the almost a decade ago. It’s a interesting if very short read. You’d think if a magazine that important managed to get the gang back together for the first time in a very long time (as they so boast in their pages) that they would have asked more questions and made the most out of the situation. But there is still some value in the read.

And finally there is a lovely, and fairly thick collectors booklet detailing the story from start to finish in colour – utilising screen shots, behind the scenes photos as well as production drawings. This is probably the best addition for this release, but even with everything added in it’s still going to be a judgement call for the buyer.  The disc has nothing extra, it’s literally a matter of if you really want these printed extras.

For first time buyers, or anyone upgrading from Video or DVD then we do recommend it highly.