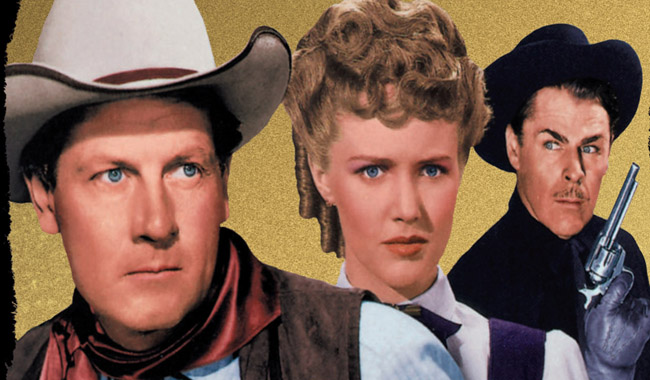 The story is set in 1885 when civilisation was slowly making it to the West. A young trained teacher called Molly Wood (Barbara Britton) leaves the stuffy Vermont suburbia (and her dull fiancée) for a Wild West frontier town in Wyoming to open a school. When she arrives she finds it utterly charming that the train has been held up with cattle on the railroad tracks and a couple of cow hands in no apparent hurry to move them for the big iron horse of a train. (Trains were bringing civilisation to the West and there were many none too impressed with these steaming monoliths cutting through the land.) The two cowboys are Steve (Sonny Tufts) and The Virginian (Joel McCrea) who both proceed to flirt with Molly, with The Virginian saving her from a wild steer. But they are not alone. Black clad Trampas (played byregular bad guy Brian Donlevy) also vies for her attention causing conflict. The Virginian knows that Trampas is a none too pleasant individual and also suspects that he is a cattle rustler terrorising Wyoming. Many of the local farmers are starting to move from the State up to Montana as lawlessness still reigns unchallenged in the town; Trampas even has the sheriff in his payroll. Tempted by money Steve begins working for Trampas despite his pardner’s warnings.

The 1946 film is the fourth version filmed of the Owen Wister novel from 1903 that was also adapted into a play the following year. It had previously been filmed in 1914, 1923 and as an early sound western in 1929 starring Gary Cooper. While Joel McCrea was more convincing than Cooper and adds more human believability, the story even by 1946 had become stilted and somewhat clichéd in the western genre. Yet it is McCrea’s performance as the stoic cowboy that works particularly well in this film – this is the kind of role he would play many times. The Virginian is a toughened guy who would like to settle down and earn enough honest money to move East. He knows the laws of the West in that justice must be done, no matter how harsh it may seem. This is best played out after he and other cow hands have gone as a posse to hunt down the cattle rustlers who have stolen 200 head of cattle on the town Judge’s orders. They eventually track three of them down (Trampas has escaped) including his old friend Steve and they all know that they will hang. Steve goes to the rope stoically, understanding that his old pardner doesn’t have a choice. Later The Virginian is ambushed by Trampas and shot in the back. While recovering Molly discovers that her beau had ordered Steve to be hung. She doesn’t understand this and how the law of the West works. Molly also argues with the family she is staying with who rebuke her ignorance of frontier life.

The Virginian would see further life as a long running TV series which ran between 1962 – 1971 with James Drury playing The Virginian, Lee J. Cobb as the Judge and a young Doug McClure playing Trampas but now Trampas is a good guy. As an old film it is somewhat dated, further propagating the myth of the Wild West but there is at least some intelligence behind the plot and characters with McCrea clearly delineated as the good guy and Donlevy further developing his image as the bad guy (replete in black) that he had been playing so well in such films as When the Daltons Rode (1940) but the political awareness of frontier America comes over well but would be superseded by the superior John Ford western Red River two years later. This Universal release of a Paramount film has some vivid Technicolor but in place the colour seems to mismatch an fade in and out. There are no extras other than a number of language options.