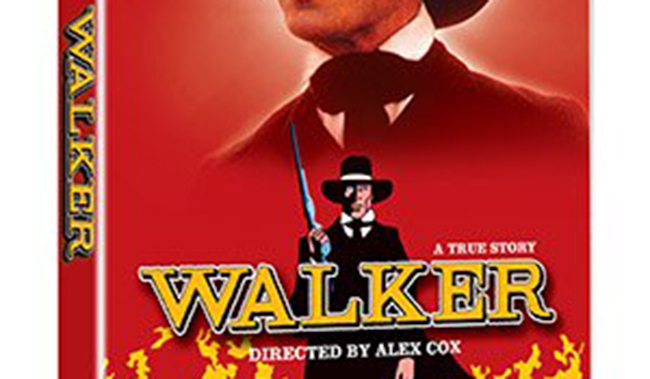 Alex Cox was a director who pre-figured Quentin Tarantino. Not wishing to sound too pretentious, but Cox was a director with a Postmodern punk sensibility. Walker is part western, part biopic and part political fiction. His influences, like Tarantino are often from cult and exploitation films and in this way became a director of cult films himself. His previous films include the strange science-fiction film Repo Man (1984), Nancy and Sid (1986), the biopic of Sex Pistol Sid Vicious and his American girlfriend Nancy Spungeon and Straight to Hell (1987), a punk spaghetti western. Walker was bigger in scope and with a strong political edge to it and effectively ended his career as far as Hollywood was concerned.

The film is a biopic of William Walker (played by Ed Harris in an early role for him), a mercenary and gun runner who wound up in Nicaragua in the 1850s. He was sent to settle a Caucasian community in Latin America and surrounded himself with an army in an already unstable country in order that US influence could be felt in the country. Between 1856-57 he became the President of Nicaragua before he was overthrown by an alliance of other Latin American countries when he was executed in Honduras in 1860. According to the film he was financed and pushed to Nicaragua by millionaire financial wiz Cornelius Vanderbilt (Peter Boyle) – this is the first of many conceits in the film; it was actually associates of Vanderbilt’s who sent him there. Once in country Walker surrounds himself with a militia, creates an insurrection in the unstable country and assumes Presidency. But William Walker is no Che Guevara but more of a Major Kurtz as he becomes delusional and just falls short if declaring himself as a God. His own brother joins him and is treated with disdain and whom he eventually shoots dead. The film ends with a shoot out and a massacre in a Bacchanalian orgy of killing.

The overall look and style of the film is very similar to spaghetti westerns, particularly the Django films with even the sounds of the pistols sounding similar to the Italian films and the amount of blood used as well as its excesses. But the film goes further, it delivers a number of what could be seen as deliberate conceits drawing closer ties to the current US-Latin American politics. It was actually shot in Nicaragua during the Contra War. As the film develops, what is introduced is a number of modern elements including a Mercedes Benz overtaking a horse and cart, one of Walker’s men reading Time magazine and ending, during the massacre with the arrival of US helicopters to pick up American nationals before they are killed by the South American rebels. William Walker, when asked by an American politician if he is American (and can be safely taken away by helicopter), Walker chooses to say that he is Nicaraguan and stay. The music, provided by former member of The Clash was by Joe Strummer who also did the soundtrack to Straight to Hell.

Clearly this is a political film commenting on The US Government’s involvement in Nicaragua between 1979-1990 in which terrorist action was used to de-stabilise the country. Since the 1960s the US had been paranoid about the tentacles of communism coming to America and spent several decades interfering with Latin America. Clearly Cox’s film is drawing parallels with the contemporary American politics but on its release the film faced a great deal of criticism and was derided not only for some historical inaccuracies but its comments of Americas involvement in Latin America. In summary the film was perhaps too early for American consumption, both politically and stylistically. Following the films failure Cox has not made another film in the US and his films are only given very limited release. Unlike many films from the 1980s though it has aged quite well and is ripe for re-visiting. One more recent comment made the point that today William Walker is all but forgotten in America, but in Nicaragua he is remembered as being the Osama bin Laden of Nicaragua. The film looks clean in the Fabulous Films release, but there are no extras on the disc.