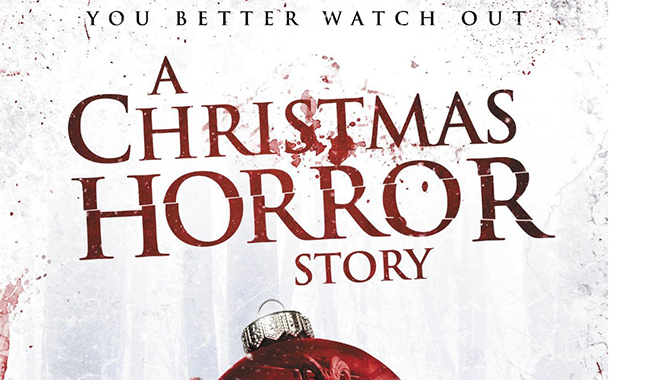 One could argue that a horror themed Christmas movie should follow one of two tracks. Either outright terror or subversive hilarity. You could, for example, have a couple bring home a sinister changeling on Christmas Eve, or a highly dysfunctional family being stalked through the forest by Santa’s dark shadow, Krampas. Maybe a yuletide murder spree in a shopping mall is more to your taste; or perhaps an outrageous bloodbath where Kris Kringle has to slice and dice his way through a horde of ravenous elves.

Alternatively, you could wrap all of these concepts up with a transparent and powerfully cliched tale of teenagers trapped in a basement with Sadako knock-off #450,378. All the while having William Shatner’s boozing, pointless radio host failing to tie the whole sorry mess together.

A Christmas Horror Story is lop-sided and stumbles along without any idea of what it wants to be. That it has three directors is telling because it suffers from wild tonal shifts and inconsistencies. Character development completely bottoms out because none of the stories are given room to breathe. Things happen, and elements from one arc briefly surface in another.

Given that Romero’s Creepshow has been cited as an inspiration for this movie, it’s curious that it wasn’t episodic. Distinguishing each narrative from one another would’ve done a lot to improve the quality overall. The changeling plot is creepy, and could have hit outright terrifying if it had been allowed to flower. Santa fighting infected elves should have been a riot, rather than a series of jarring interludes.

When it tries to be funny, it’s boring. As a horror, it isn’t scary. At some points it’s outright depressing. A Christmas Horror Story doesn’t have plot holes, it has festering bullet wounds. In it’s defence, there is a reasonably decent twist at the end, but it comes as too little, too late.

It’s not all bad. There are some decent performances, largely from the cast’s youngest members. Orion John brings the chills as a murderous cuckoo-in-the-nest. Defiance’s Amy Forsyth is likeable and engaging as five-fingered teen Caprice. Tragically, the wonderfully named Zoe De Grand Maison proves she is too good for such an outright calamity.

Similarly, some credit has to be given for the make-up effects, but points have to be deducted for the return of our old friend: pitiful CGI blood.

In terms of special features, there’s a lone “making of”, which is hilarious if only because director Steven Hoban insists he’s making something scary, fun and clever. He claims he wanted to know where the cool and edgy movies were – the answer being: nowhere near this one.

Here’s your lump of coal. Avoid.