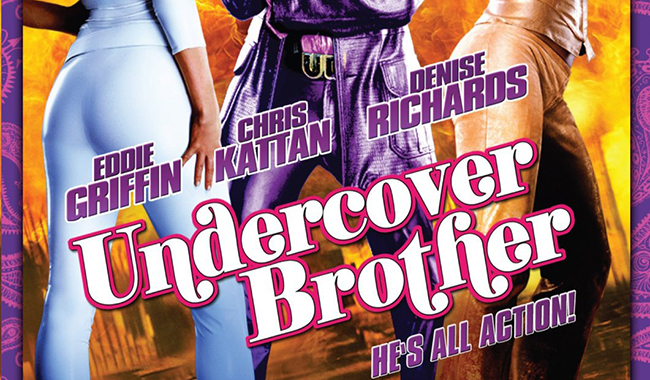 In 2002 the film Undercover Brother walked the political tightrope much better than the films it followed, namely the Austin Power films. In Austin Powers our eponymous hero is transported from that late 1960s to the late 1990s where he finds women are more empowered and men can’t treat women as sex objects like they once did. Dealing with race is a bigger political minefield and would expose itself easily to accusations of racism from both black and white. In that, an otherwise mindless comedy like Undercover Brother is actually quite smart.

The film pits a black organization called The Brotherhood up against the The Man, an arch government pro-white American group led by The Man who wants “to keep the White House white”. A retired African American general called General Boutwell (Billy Dee Williams) has a big announcement. The Brotherhood are hopeful that he will announce that he wants to put in his nomination to run for the President of the USA. They are left bitterly disappointed when instead he announces to open up his own chain of fried chicken houses. The Brotherhood are convinced that The Man is behind this. They bring in 1970s super Afro sleuth Undercover Brother to investigate. He discovers that a chemical used in Boutwell’s fried chicken makes black people compliant to white ways. In one scene UB is without his afro and his funkadelic clothes and is instead wearing a suit, indicating apparently that he has gone ‘white’ and tries to find out what and who is behind this. The Man brings in super sexy White She Devil to seduce The Brotherhood, knowing that the black man is seduced by a big bootylicious white girl (played by the sexy Denise Richards).

As can be seen by the plot, the film balances on a fine line. But it essentially becomes something of a single joke that does work quite well but grows tired as the films wears on. Much of the energy it has is derived from Eddie Griffin’s character of Undercover Brother who doesn’t let the overwhelming flash-bang-wallop and general blinginess of the film overwhelm him. Under director Malcolm D. Lee’s stewardship the film neither targets white nor black but instead makes fun of both stereotypes. Neither side are exclusive to one race or the other. Neil Patrick Harris for example who plays Lance (best known for his role in ‘How I Met Your Mother’) works for The Brotherhood. There are other types in The Brotherhood too such as Conspiracy Brother who dressed like a Black Panther sees everything as racism and the overweight Smart Brother.  Black and white are equal targets: most obviously how to seduce the black man through chicken and the mass appeal to white folk of the likes of ‘Murder She Wrote’ and other such shows.  Yet the focus of much of the comedy, despite the odd reference or joke about slaves is on Blaxploitation. What a shame then that the likes of the original Shaft or Pam Grier don’t pop up at least in cameos. Obviously Griffin’s character is the most obvious with his Jim Brown style kar-ar-tay as he flies through the air and kicks the villains in his lilac coloured suit and platform shoes which also have James Bond style special adaptions. It’s nothing new to parody or send up Blaxploitation and even at its height it kind of did it itself but this film has a modicum of intelligence about it, even if it is not that obvious.

The plot and the relentless noisy action runs thin after a while but never the less remains entertaining. In the 13 years since this film was released we have of course already had a black (albeit mixed race) President in the White House who had garnered the sort of typical racist slurring one can expect but in that time there has sadly also seen an America (in some areas) the most divided in terms of race since the Civil Rights Movement. Maybe the Man has also got to Barack Obama too as he doesn’t to have helped galvanise the nation.

There are few extras to the film other than an alternate ending and commentary tracks.