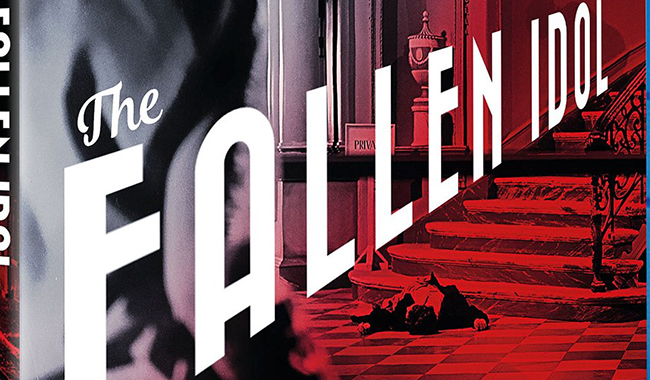 With The Third Man director Carol Reed crafted one cinema’s most celebrated works. His collaboration with author Graham Greene would to lead to 1959’s Our Man in Havana, but it began in earnest with The Fallen Idol. On November 16th, StudioCanal releases a lovingly restored version of their lesser known classic.

The Fallen Idol distinguishes itself from many British dramas of the period. It’s a tense, subtle procedural, sporting some compelling performances. Ralph Richardson stars as the sympathetic yet adulterous butler Baines; who’s wife (a seething Sonia Dresdel) dies in suspicious circumstances. Matters are complicated by the only witness to her death, Phillipe (Robert Henrey) – the young son of the ambassador Baines serves.

Phillipe frames the entire narrative and a great deal of the drama comes from his innocent appreciation of events, as well as his manipulation at the hands of both Baines and the investigating officers (including Jack Hawkins and Bernard Lee). It’s worth noting that Phillipe is profoundly irritating, but this benefits the story, and shows some keen characterisation on Greene’s part. Richardson is likeable, but Baines’ fumbled attempts to conceal his infidelity add a striking dynamic tension to the proceedings.

Though beautifully realised, the pacing of The Fallen Idol shuffles along during the first act. However, once Dresdel dies, the film notches up and sweeps you away with it’s intrigues.

There are commendable special features including interviews with Robert Henrey and film historian Charles Drazin. Richard Ayoade provides a refreshing fan perspective, though the inclusion of an awkward ‘locations featurette’ feels wasteful.

The finest extra is an intriguing interview with Reed’s assistant (and four time Bond director) Guy Hamilton. He provides fascinating insights into Carol Reed as a film-maker, as well as the state of the British industry at the time.

The Fallen Idol deserves respect, and StudioCanal have dedicated serious time and resources in order to deliver a new version worthy of it.