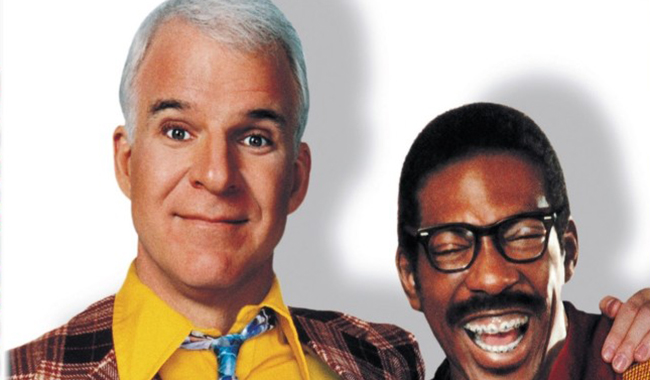 Like Woody Allen before him, when talking about Steve Martin a lot of moviegoers and even critics would say “I prefer his earlier funnier films”. The difference was that Woody Allen’s earlier films were straight comedy before he began bringing intellectual elements and tragedy to his films. Martin’s films went down a different path. His early career highlight was his first major film, the still cult and surreally humoured The Jerk way back in 1979 and the equally surreal mad doctor homage, The Man With Two Brains (1983) and even the screwball comedy All of Me (1984) and Three Amigos! (1985) were quality comedies, by which point his films seemed to homaging classic Hollywood. This was taken to the enth degree with the dreadful but hugely successful Father of the Bride in 1991 at which point Steve Martin became a by-word for safe comedy. As the decade wore on his films became less successful and less popular. When he made Bowfinger in 1999, sparring against Eddie Murphy, a tough act to compete with, it felt like there was a return to form. Hardly surprising as this was an idea Martin had began to put together some 13 years before.

Bowfinger is a comment and a comedy about Hollywood and in particular B movies trying to compete with the bigger studios. Steve Martin plays Bobby Bowfinger, a down on his luck filmmaker who makes Z grade movies. He has saved about $2,000 and has had a script for an action film that he thinks perfect, written by his lawyer, Afrim. The film is to be titled ‘Chubby Rain’. He tries to get the attention of a top action star’s agent (Robert Downey Jr.). This fails at the first hurdle at a restaurant. He decides to get a bunch of Mexican immigrants and hire them as crew as well as calling on favours from his B movie actors friends, including an actress who’s arrived in Hollywood desperate to be a star (played by Heather Graham). The action star in question is Kit Ramsey (Murphy). The team begin stalking him and filming him from behind hedges. After a while they realise that they need a look-a-like for Kit Ramsey and find a shy, awkward young man with braces working in a burger joint (Murphy again). Later they realise that he is actually Kit’s brother. They put him through all sorts of dangerous stunts such as running across a busy highway – Bowfinger telling him that all the driver’s are stunt drivers and know what they are doing. Needless to say Kit Ramsey starts to become paranoid and believe that aliens and zombies are after him. He goes to see his guru for advice (in a funny cameo by Terence Stamp).

The results are predictable and can be a little mawkish at times but Martin does a good job of balancing his character as an idiot savant and a Machiavellian player – no mean feat. There are unbelievably some precedencies for this film. In 1927 silent Hollywood legend Mary Pickford was on vacation when a Russian filmmaker tried to cobble a film together from the footage and pass it off as a film starring Pickford. Also in 1956 former Dracula Bela Lugosi died at his Bel-Air home. At the time he was making what is often cited as the worst film ever made, Edward D. Wood’s Plan 9 From Outer Space. Lugosi died a couple of days after shooting commenced leading to Wood using footage of Lugosi walking down the street and going through his front door and a stand-in walking around with a cape over his face. Directed by Frank Oz and written by Martin the film is a perfect fusion of three men of comedy coming together and making a film that hits the right marks (this was the 4th film that Oz and Martin had made together). The disc is well presented and has a couple of deleted scenes as the only significant extras.