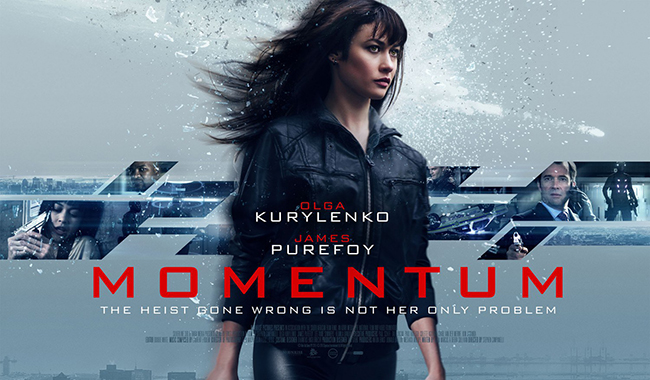 There’s a delicious transcontinental flavour to the debut feature from long time Clint Eastwood collaborator Stephen Campanelli. Momentum has Ukrainian Olga Kurylenko trading blows with scene-devouring Brit James Purefoy in South Africa. Her character Alex has history with the Israelis, part of her crew is Irish and Morgan Freeman demonstrates what would happen if a Bond villain were elected to the US Senate.

Momentum is a curious slice of action cinema. Beginning with an unnecessarily futuristic diamond heist, the film hops into a skeletal plot about an incriminating hard drive, which Kurylenko and her crew picked up during the job. Mr Washington (Purefoy) and his heavies are hired to retrieve the drive so that Freeman can save the US by blowing up thousands of it’s citizens.

The story is practically irrelevant, but it does provide suitable transitions between the film’s striking action sequences. There are plenty of exciting shootouts and an early car chase really delivers. Momentum is unflinchingly brutal in parts (one child actor certainly earns his fee), but also punctuated with inventive shots and set pieces.

Purefoy does the lion’s share of the talking, and clearly relishes his gentleman psychopath role. His exchanges with Kurylenko contrast her quiet intensity and subtle charm with his villainous swank. Unfortunately it’s during one of these confrontations that Campanelli slams on the brakes; frustrating the movie’s decent pacing with a contrived attempt at fleshing out Kurylenko’s back story.

Momentum has the makings of a decent franchise. With a few more re-writes and a slightly bigger budget, it could capitalise on it’s obvious sequel baiting. Kurylenko is a magnetic lead who, with some decent character development, could be rounded out quite nicely in any future outings.

All tolled, Momentum is worth a rental more than full price at the cinema. Regardless it is an entertaining first outing, and certainly worthy of your time.