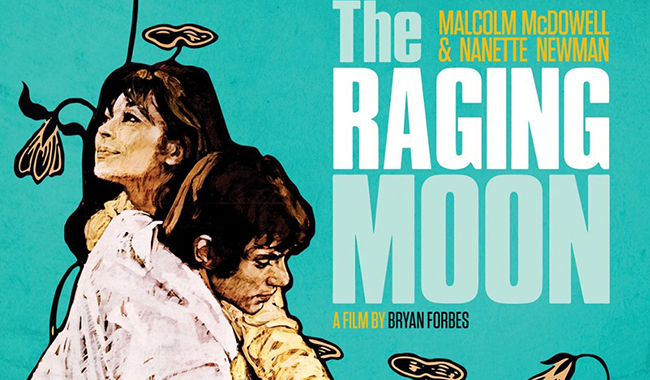 Adapted for the screen and directed by Bryan Forbes this adaptation of Peter Marshal’s play dared to show love and romance between two wheelchair bound individuals. But lead Malcolm McDowell plays no hero who has lost the use of his legs in conflict but instead is an ordinary bloke and not necessarily a nice one. Made in 1971, the same year that McDowell starred in Stanley Kubrick’s controversial A Clockwork Orange, here in many ways playing a similar self centered kind of character, only that his redemption takes a different route. In The Raging Moon he plays fun loving working-class Bruce Pritchard, a northern man in his early 20s who enjoys playing football and has an eye for the ladies. He lives with his middle-aged parents and shares a room with his geeky brother (Geoffrey Whitehead) who is due to marry. Bruce enjoys haranguing his brother but agrees to be the best man at his wedding. During the wedding Bruce naturally continues his boozing ways but gives his brother a good send off. However, after the wedding and on his way home a drunk Bruce collapses in the lift back to his apartment. He wakes up in hospital where he is told that he has lost the use of his legs and may never walk again. While in hospital his brother continues to visit him, but is coerced into getting into a home at the behest of his new bride. He takes him to a nursing home miles from his hometown where he is pretty much left to his own devices. The carefree spirit of Bruce from the earlier in the film has all but disappeared and is replaced by a bitter version of himself.

At first Bruce is bitter and resentful to being institutionalized. He rejects the friendly approaches by the other guests until his interest is awoken by Jill (Nanette Newman), a prim middle-England girl who’s parents are in denial with regards her condition. Just as Bruce is getting to know Jill she is taken away by her parents but the this doesn’t work out leading Bruce to be happy that she ends up back at the home, much to Bruce’s happiness. As time develops so too does the relationship between Bruce and Jill that eventually leads to a full blown relationship.

At the time Forbes made this film he was also made the head of production at EMI so bravely went ahead into production of the film. However, his bravery and best efforts did not pay off and the film faired very poorly at the box-office and did not exactly set the critics alight with excitement either. It is also perhaps the least remembered of McDowell’s early features having become a strong name in British cinema since the strong start in Lindsay Anderson’s If…. in 1968 and of course the success of A Clockwork Orange. For all that, this is a better film than history has shown, with McDowell delivering a believable performance as the outrageous young man tempered by his disability and a true professional direction by Forbes. There are also precedents for this kind of role, disability aside. As a character who finally finds a redemption he is not too dissimilar to the character of Arthur Seaton in Saturday Night, Sunday Morning (1960) or Vic Brown in A Kind of Loving (1962). A rewarding film deserved of a fresh look and definitely deserves to be better remembered thanks to the Studiocanal release. The only extras on the disc are talks by McDowell and Newman who affectionately remember the making of the film and Forbes.