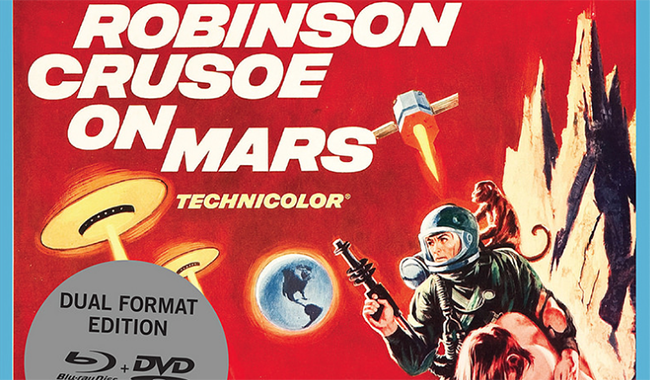 The space race was fully on when Robinson Crusoe on Mars was made in 1964. At the time the Soviet Union had the edge over the United States, while a couple of years previously President John F. Kennedy had increased funding for NASA to develop technology for the first man to land on the moon. Natural then that a film exploring man’s exploration of space should take a classic novel/story as the basis for its, erm, launchpad. Literally adapting Daniel Defoe’s classic novel of a castaway learning to survive on his own on a desert island until he eventually finds friendship in runaway slave Man Friday and escaping pirates is a natural leap. The adaptation works particularly well here, albeit a rather curious and quirky release from Eureka!

The film opens with a rocket command module hurtling through space (using some good stereo sound as the rocket moves towards the screen). The module contains two astronauts circling Mars who have woken from a deep sleep. Another of the passengers is a small rhesus monkey (echoing the launch of Albert, the first monkey in space who died on returning to Earth). A problem occurs to the module and the astronauts jettison to Mars separately in smaller vessels. They land quite some distance apart. One of the survivors is Commander ‘Kit’ Draper (Paul Mantee) who realises that his module is damaged beyond repair and is unsure of the whereabouts of his colleague (played by future Batman Adam West). He is anxious about survival and thinks that he only has enough water and oxygen for 16 days. As luck would have it he finds a method for breathing and discarding with his space suit and discovers an underground fresh water spring. He also discovers combustible rocks solving his issue with heat. The radio had survived the crash but the transmission to the still circling space craft is non-communicable. While exploring he stumbles across the other crashed escape vessel but his colleague had been killed in the crash and finds that the only survivor is Mona, the small monkey who becomes his companion. Over the next few months Kit finds himself alone with his monkey until this is disrupted by attacking flying saucers which appear to be hunting a runaway slave (Man Friday). Having just about escaped the aggressive flying saucers (which effectively move like flies, a particularly potent image from my childhood memories of the film) the lives of both men are now at risk. Together they learn survival and friendship, although Kit is assertive about how his new friend must learn English rather than he learn the language of the man.

The film works surprisingly well on the small screen. Of course the special-effects may look dated now since the advancement of George Lucas’s Industrial Light and Magic and CGI advancements over the years but never the less the colours and matte painting stand out against Winton C. Hoch’s Death Valley filming and camerawork. Hoch had previously filmed John Ford’s cavalry western She Wore a Yellow Ribbon (1949), shot in Monument Valley and the blood red sky in that film must have surely been an influence and inspiration behind the film. It was directed by Byron Haskin, a director who had made two previous seminal Technicolor science-fiction films in War of the Worlds (1953) and Conquest of Space (1955), both films limited by but making the best of their low budgets. Again, as with both films some of the dialogue is very dated, jilted and filled with patriot bull that is a little cringe worthy to hear these days (this did prove to be Haskins’ last film though) yet this a rewarding take on a literary classic in a film with a cult if limited following.

As usual with Eureka! the quality of the film is superb and the colours stand out particularly well but other than a commentary and trailer the disc is bereft of the labels normal selection of extras.