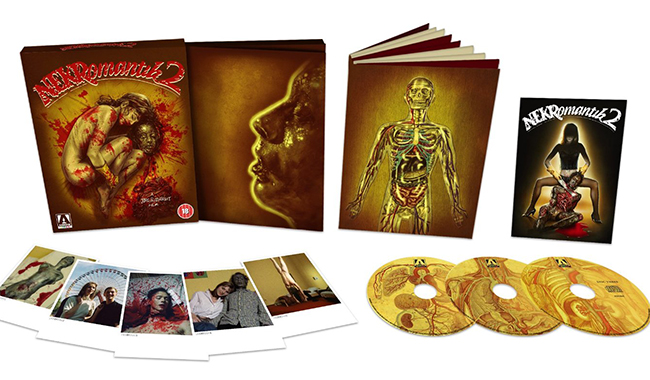 With 1987’s Nekromantik, German director Jorg Buttgereit confronted the world with an inventive, challenging and surprisingly elegant statement of purpose. While still banned in over a dozen countries, it’s regard amongst both exploitation fans and high brow critics has never faltered and has, in fact, grown steadily with time.

Appropriately, Nekromantik 2 has followed suit. With the collapse of the Berlin Wall, Buttgereit and long time accomplice Manfred Jelinski were able to produce a more refined and visually compelling sequel; thanks partially to the limited restrictions and financial benefits of the degenerating East Germany. Exploiting this window of opportunity gave rise to an altogether more sophisticated, though no less controversial film.

Despite opening with the final scene of the first movie, both plots are largely divorced from one another. If you’ve never seen Nekromantik you won’t be lost here. The title does a lot of work for you of course, but what both movies manage is to defy expectations. Nekromantik 2 emphasises the romance of necrophilia. Here a decent, “ordinary” young woman (Monika M) is caught in a love triangle: it just happens to involve plain dub-actor Mark (Mark Reeder) and the cadaver of Rob Schmadtke from the first film.

Though there is a lot for exploitation fans to chew on in either case, the Nekromantiks are lyrical and poetic works of art. That Nekromantik 2 could capitalise on better stock and camerawork reveals Buttgereit’s singular vision, and his two leads deliver believable performances carrying genuine emotional weight.

Unfortunately, the movie’s pacing can be punishingly slow. Scenes of the young couple dating could have been trimmed down, and there are some cut-aways which feel unnecessary. What’s interesting is that these minor gripes draw perilously close to the complaints some fans of the original had about Nekromantik 2. That it was too slow, too boring, that the scenes of sex and violence were too few.

This argument is touched upon in the first of the Blu-Ray editions many special features. “Masters of Life and Death” catches up with the main players nearly 25 years later, providing not only fascinating insights into the production, but also the culture of art, censorship and politics during such a tumultuous period of history.

This short documentary contrasts nicely with “The Making of Nekromantik 2”. Shot during production, it is an intimate record of a project which, despite it’s controversial nature, was clearly a labour of love for all concerned.

Likewise, the raft of special features included in Arrow Films’ new edition show a similar regard for this new release. Two further documentaries explore the locations critical to the movie’s production – the first from the perspectives of Reeder and Jelinski; the second from prominent film scholar Dr Marcus Stiglegger.

Nekromantik 2’s beautiful score is celebrated with footage from a live performance given to celebrate the film’s 20th anniversary. In “Nekro Waltz”, Mark Reeder discusses his contributions to the soundtrack. Also included are music videos and an image gallery and, intriguingly, two shorts – a delirious slice of Nazi-spolitation Bloody Excess in the Leader’s Bunker (1982) and A Moment of Silence at the Grave of Ed Gein (2012). Two very interesting, albeit questionable, films which further showcase Buttgereit’s unique talent.

The only way to know if Nekromantik 2 is for you, is to see it. Gore-hounds may feel cheated, cineastes may be repelled, but no one can deny that it is a testament to the power of emotion and imagination; and a celebration of those who can them to the screen.