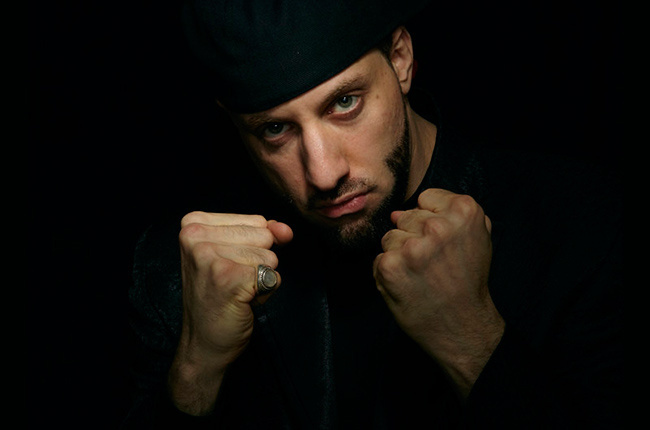 It’s a mixed atmosphere at The Kazimier tonight. The Liverpool hip hop massive is out in force, especially considering it’s a Monday night in the run up to Christmas, and everyone in the venue is in high spirits – that’s either high, or battered on 8% lager. In a strange reversal of normality, the clouds billowing out of the venue and into the smoking area are testament to that. On the one hand, the mood is buoyant; on the other, there’s a tangible sense of sadness in the air as we all take another inevitable step towards to the closure of one of the best things to have happened to the Liverpool music scene since the glory days of Korova.

This evening’s show marks the last outing in a run of hip hop shows that will surely go down as a pivotal period in the city’s musical heritage, at least for those in the know – special mentions have to go out to promoters Chris Tyler, Steve ‘Revo’ Miller, Chris Wareing and Paddy and the No Fakin’ crew for bringing some of the biggest and most respected names to a city that has so often been bereft of opportunity for rap fans. To see names like Action Bronson, Blackalicious, Chali2na, Dead Prez, Ghostface Killa, GZA, KRS-One, Peanut Butter Wolf, Pharoahe Monch and Shabazz Palaces gracing the stage of this intimate venue over the past few years has united and consolidated the local scene and provided some of the most exciting, raw shows that Liverpool has seen for years.

After the now customary power hour of chops from the No Fakin’ crew to start proceedings, legendary underground hip hop producer and DJ Mr Green is first on stage tonight on warm up duty. Boasting production credits with the likes of Snoop Dogg, Talib Kweli and Matisyahu (something he won’t let us forget tonight in a hurry as he rewinds and cuts short most of his set to tell us – repeatedly) it’s a slightly awkward start to the night that fails to really engage the crowd, despite his best attempts.

Thankfully it’s not long before A-F-R-O takes to the stage and kicks things up a notch – this 17 year old prodigy is already being tipped as the “future of old-school” by the press and it’s easy to see why tonight. He spends the best part of twenty minutes churning through rhymes like a seasoned veteran with a flow and cadence that take most others a lifetime to master and the tonal quality of his voice is like a gift from the Gods. Merging the depths of Chali 2na’s baritone with a dynamism and acrobatic flair that frankly drops jaws across the dance floor, it rightly earns him an eruption of applause at every opportunity. His set comes capped with a freestyle that might not be the best we’ve ever heard, but will still take some beating. Without a doubt, all eyes in the room are going to be firmly fixed on the future of this youngster.

A swaggering R.A The Rugged Man finally appears from the wings dressed something like a cross between WWF wrestler The Godfather and James Brown in the midst of a crack binge. A wild eyed pimp down on his luck but full of fire, he slams straight into party anthem ‘Definition of A Rap Flow’ with its call and response chorus and water-tight delivery immediately showcasing the undeniable talent on display tonight. With a reputation for orchestrating chaos at his live shows, tonight is no different – at one point he pulls out one plucky Scouse bird to join him on stage only for her to slip over on her way to the stage, before he shoos her away and tells her she “took too long” to get on stage, and throughout the night there’s a dishevelled Christmas tree that’s passed around the crowd and eventually shredded to bits leaving a thick layer of soil on the floor.

Halfway through, R.A looks to the crowd for assistance and calls for a local beatboxer – nobody is expecting the immaculate beats from the burly geezer that ends up on stage who proudly proclaims “25 years on the mic!” in a thick Scouse accent and thrusts his own CD into the hand of the headliner, perfectly embodying the passion and spirit for the genre that’s alive and well in the community. The whole set ends with a stage invasion that culminates in at least thirty people stage diving into a collapsing crowd and a grin spread so far across the Rugged Man’s face that he’s probably still peeling it back from his ears this morning.

From the inclusivity to the social awareness, the friendly party atmosphere to the utter chaos that ensues, nothing could have summed up this run of shows better than a line-up featuring an old school icon and one of the hottest young bloods in hip hop. As the show comes to a close a female fan appears at the side of the stage with a small pink baby bib and thrusts it into R.A’s hands. He returns to the mic for one last word.

“Yo, the show is over but look at this. Who made this? You made this? I’m having my first baby in a week and check this out.”

Visibly choked up, he holds up a bib that reads ‘My Daddy Is The Legendary’ and gives her a huge hug, and just like that, we all feel like that’s what hip hop is all about, and what we’ll miss about these very special shows.