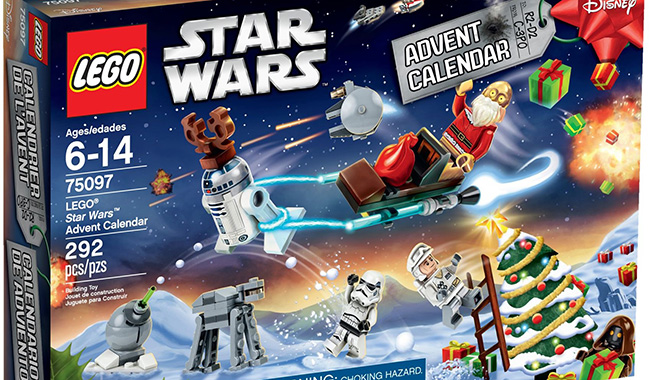 The Lego Star Wars advent calendar has over the years become a staple release in the approach to Christmas. It is therefore no surprise that in its fifth year the format is exactly the same as in previous years. As usual we can expect a mix of minifigures, buildable ships and small complementary setups.

As usual all of the figures and models are already depicted on the box itself, so there is no spoiling of surprise by reading this review. The mini builds are usually pretty simple and the only instructions to each model are on the backside of the advent calendar door. The contents are individually wrapped in plastic bags inside so that no parts should go missing even if the box is mistreated in use.

The mini builds consist of some very nicely designed ships consisting usually only of around 10-15 small pieces each and some additional equipment or scenery mainly in the form of mounted weapons or weapon holders.

The mini-ships are always a fun part of the calendar and the collection is again very well done considering the limitations. All the designs this year appear to be new. The Millennium Falcon, the AT-AT and the A-Wing are nice improvements over the previous models and the Sail Barge and the Sandcrawler have not previously appeared in the mini-format.

One additional new entry to the mini builds is the mini Ewok Village which again is very well designed. This must be the first location based miniature build we have seen in these calendars.

We also get two buildable droids, not including the Assassin Droid which is generally considered a minifigure. The Imperial Probe Droid from Episode V is probably my favourite build of the calendar and we also get a LIN Demolitionmech droid which can be seen on Tatooine in Episode IV. These are nice additions to the calendar and certainly more interesting than the usual collection of gun placements, catapults and weapon racks. In defence of these additional builds, they do add plenty of playability to the minifigures included but in themselves make for pretty boring builds.

The builds are certainly nothing to be scared of. With that few pieces they are easy for anyone to complete barring for the fact that these are the smallest Lego pieces you generally find, so can therefore be a little fiddly and certainly easy to lose if dropped on the floor.

The minifigure line up is a bit of a mixed bag this year. Firstly, it does seem that the number of figures has gone down this year. The trick here is what is counted as a minifigure. There are clearly six proper figures included and the Assassin Droid, which while built, is at least minifigure size. The 2014 calendar however included 9 minifigures. Nine figures has been the standard in the calendars up to now and it seems that Lego have considered the two previously mentioned Probe droid and the LIN droid as part of the nine this year. While these droids are very nice designs and certainly above the usual gun-rack standard, minifigures are really the highlights of these calendars and therefore it is a shame that there has been a cut in their numbers.

The other slight negative is the headlining Christmas pair. R2-D2 and C-3PO have been selected to receive the festive treatment for 2015. While the santa Darth Vader and Jango Fett were nicely customised versions of the figures with unique printing, the 2015 pair seems to have opted for a simpler solution which seems slightly disappointing in comparison. C-3PO has a standard father Christmas chest piece and beard piece but otherwise the figure is completely standard. R2-D2 is even plainer with just a pair of reindeer horns attached on top of the standard droid. Considering how common figures both of these are, it therefore follows that if you have ever had a Christmas set of any kind, you probably already have all the pieces to make this pair.

The positive of the figure line up is clearly the appearance of the Jawa and the Ewok which by themselves will undoubtedly sell a lot of calendars. In recent years these memorable Star Wars characters have only ever appeared in the expensive collectors (UCS) sets the Ewok Village (10236) and the Sandcrawler (75059). Therefore, for many more casual collectors this could be the first chance to get these figures. Both figures are very well done and have lots of detail. They both use the short legs so don’t have any leg posability, but this fits well considering their height. The Jawa body could perhaps do with some improvement in the future. While Jawas don’t actually have capes in the films, their long loose robes would probably be better represented with a cape or perhaps a skirt style design that we now occasionally see on mainly female figures.

Ewoks are probably the most detailed and true to life figures Lego has ever generated. Although the generic Ewok Warrior figure included here is one of the planer of the figures, it is still superb looking.

The final two are your usual army building figures. I keep saying this, but while not exactly the most exciting figures, you can never have enough Storm Troopers and the Hoth Rebel will go nicely with all the Episode V sets that have been released in the last few years!

The Star Wars advent calendar has become a Lego institution by now. We all know what to expect from it and continues to deliver as ever. The mini builds are perhaps not for everyone, but I find it impossible not to admire the ingenuity in their design. It is always a joy to put together the few pieces and then marvel at just how close to the original ships the designers have been able to get to.

Overall, the minifigure line up is good as well. C-3PO and R2-D2 look the part, even if I had hoped for something more unique. The remaining selection is excellent though and adds some nice pieces to any collection. The two buildable droids look great as well and are fun additions to go with the figures.

As ever, the disappointing part is always the gun racks and turrets. With many of them, it is actually hard to figure out what you are even looking at once it is complete. They do add some playability as mentioned before, but really the weapons could be added to go with the minifigures themselves.

Overall though, the Advent Calendar again is just what it is supposed to be; A small delight that keeps you busy for every day in December as we get closer to Christmas. And there is nothing wrong with that!