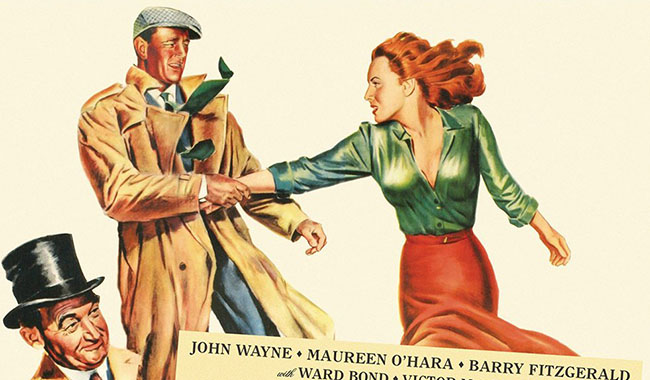 John Ford was an Irish émigré and often surrounded himself with fellow Irish actors in his films, even his westerns were peopled with Irish actors. There was a stock of actors, both leads and regular character actors that he included in his films: John Wayne and Maureen O’Hara were among many others. This particular film he had planned to make since 1935 when he bought the book rights for $10 from the author Maurice Walsh. The resultant film he would make some 16 years later and remained faithful to the original story. Ford had always wanted to make the story into a feature film about his beloved Ireland since he had bought the rights but had been denied by producers and companies including RKO who had not thought this a filmable story. Republic, a budget studio who were steered by the success of John Wayne’s relented and were sold on the idea. The film opens with an American, Sean Thornton (Wayne) who arrives at the station at Inisfree, the place of his birth. He has come to Ireland to escape America, the New World and to runaway from his troubles following the death of an opponent in the boxing ring. Here he is welcomed and embraced by the locals. Shortly after his arrival he sees a vision, namely a red headed girl shepherding some sheep in a vision that looks it has come straight out of a Pre-Raphaelite painting. The girl is Mary-Kate Danaher (real red headed beauty Maureen O’Hara). And so sets in motions Sean’s conflict with tradition, the politics of romance and most particular with Mary-Kate’s father (played by another Ford regular Victor McLaglen), who is something of a stubborn bruiser who refuses for the pair to marry.

Ford, like many ex-pats and émigrés presents a romanticised vision of Ireland, even to the point of mythologizing it. There are plenty of clichés from fist fights, drinking, local priests and flaming red haired beauties. Yet this mythologizing, as over the top as it is, is deliberate, for Wayne’s character is an ex-pat who has come home and as the Father Lonergan (played by another Ford favourite, the long suffering Ward Bond) acts as the opening narrator, he begins his story thus:

“Well, then. Now. I’ll begin at the beginnin’. A fine soft day in the spring, it was, when the train pulled into Castletown, three hours late as usual, and himself got off. He didn’t have the look of an American tourist at all about him. Not a camera on him; what was worse, not even a fishin’ rod.”

In many ways these lines open the romanticised mythology of the story presenting it as a fairy-tale. Given this one would think that Ford would film a studio bound film, but in a break with normal Hollywood procedure (and budgets) he shot on location (but in typical Ford tradition as he shot most of his westerns at such iconic locations as Monument Valley, Utah). The whole crew (and many of their family members) relocated for the summer of 1951 in Countys Gallway and Mayo in Ireland. Many of the locals were also used as extras. Ford shot the film in Technicolor using cinematographer Winton C. Hoch who had shot using the most amazing colours and light for Ford a couple of years earlier in the location shot cavalry classic, She Wore a Yellow Ribbon. Unlike in previous releases of the film on DVD and video the colours in the Eureka! Masters of Cinema release are outstanding; it is often the case that previous releases of the film have been from a sub-standard print but in the Eureka! version it does bring out the magic of the film from the greens (naturally) to the red hair of O’Hara among  others all reflecting the orange, white and green of the Irish flag making the film feel much richer than it might have done to some viewers of the past few years.

The extras on the disc are also plentiful from Ford fan and writer Tag Gallagher’s very poetic and Irish take on the film to an old Leonard Maltin documentary on the making of the film complete with interviews and his own personal view of the film. Worthy of spending the extra buck on this new release.