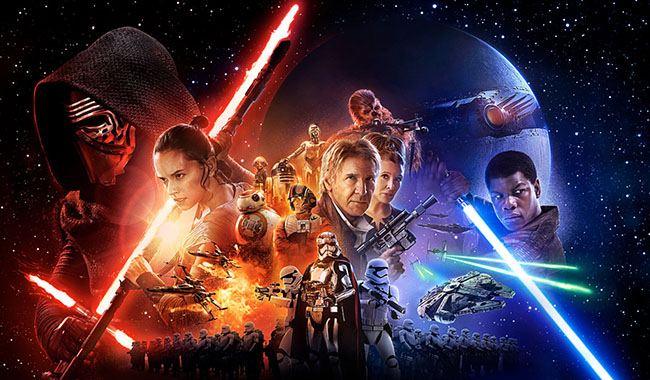 Right off the bat, please be aware that although this review will be reasonably brief and of course spoiler free; the general approach to cinema reviews is to assume that it’s OK to mention any and all details shown in the various official Teasers, Trailers, and TV Spots, should the reviewer deem it necessary. This could mean that anyone (like yours truly did), who has steadfastly kept away from any and all information regarding what to expect; might want to stop reading now.

Of course we are acutely aware that we are rather late to the party with our review, this is due to the unexpectedly massive weight of responsibility in delivering any opinion whatsoever.

On the plus side, this review is now based on four (count them), four viewings of the movie.

While we would not presume to speak for the entire planet; it is something of an understatement to say that as far as protracted anticipation for the release of a movie goes; The Force Awakens takes some beating.

Right from that moment in 2012 when George Lucas got handed a great big $4bn retirement cheque and Disney promptly announced their intention to bring us a new Star Wars film in 2015; the pressure build-up began. Then came the much anticipated and hoped for announcement that the original main cast had all signed on to appear in the new movie too.

From that moment three years ago, to the film opening on December 17th, and staying on an almost constant rotation all day every day since; it has been one crazy journey.

If the initial teaser set pulses racing; the first full trailer proper had many fans of the original movies in actual tears of joy.

JJ Abrams’ unspoken promise to wash away the bad taste of Lucas’ own soul destroying prequel trilogy and return us to the glory days of Star Wars as we knew and loved it; seemed to be finally bearing fruit. It’s fair to say that expectation began to hit stratospheric levels.

So here we go, and I promise it will from this point be brief, and not give too much away.

The film takes place 30 some odd years after the events of Return of the Jedi and the fall of the evil Galactic Empire.

Things have not panned out too well in the interim in terms of peace and a restored republic. We have an all new, enigmatic villain in the shape of Kylo Ren (Adam Driver), seemingly at the head of a new dark new force called The First Order. You know the deal here; they drive Star Destroyers, fly TIE Fighters and have legions of Stormtroopers and a very bad super right wing attitude etc.

As before, we have a rag tag group of ‘goodies’ fighting the good fight for the republic, this time calling themselves The Resistance.  They have hidden bases, and fly X-Wings. It’s pretty groovy, if strangely familiar.

This is the part where one would usually insert a little business regarding more of the film’s basic plot and characters.

I have wrestled with how to do this, what to say and what not to say and have come to the conclusion that the majority of readers who are yet to see the film would probably rather go in fresher than your common or garden movie.  Let us simply say, that we have a clutch of new characters including a defecting Stormtrooper, and a mysterious scavenger, as well as a new droid that manages to be cuter than R2-D2 without making you want to punch something.

It occurred to me that to say anything more of the plot would be to reveal more than the trailers cleverly did, however eagle eyed viewers of said trailers will have certainly noticed a few very intriguing images, and will just have to dig deep in their Star Wars memory banks when watching the new movie to find out more. Again, this coyness in the light of the lateness of the hour is understood.

The film cracks along at a very well chosen tempo, and we learn just enough about this new era to understand what’s going on, but not so much that the tempo is brought down in an expositional fug. The new characters more than hold their own beside the old favourites, and they endear themselves to you extremely effectively (an achievement none of the prequels ever managed). The film looks amazing, the effects are dazzling and in places extraordinarily beautiful. There is very little sign of anything resembling the silly over reliance on dumb CG that mired the prequel trilogy (Stormtroopers are actual people in actual suits for example), and the writing and line delivery put you at ease immediately. It’s also extremely funny in places, which again should be a welcome quality to anyone steeped in the original film’s blend of elements.

In all honesty, The Force Awakens delivers on all the fronts JJ Abrams promised it would. Fans of the original trilogy will definitely feel very comfortable (critics might say a little too comfortable, but that’s up to them). There is a sense that even though the film is ‘Part 7’ of a series now open ended, it also works extremely well as a reboot of the Star Wars universe for the legions of young viewers that may be coming to it as their first movie experience.

In fact, one could say you get almost everything you could possibly wish for from a reignited Star Wars movie franchise, including a story with extremely familiar beats. You must of course judge for yourselves.

There are certainly elements that for this long in the tooth writer and long standing Star wars fan, didn’t work so well, and if you want to hear about those; I suggest you go see the film, and then download our Force Awakens podcast.

Regardless of any and all minor (or even major) quibbles, you can at least rest assured; that there isn’t a Gungan (or for that matter, an Ewok), anywhere in obvious or significant sight anywhere in The Force Awakens, and it is deserving of massive praise just for this mercy.

This author is planning and hoping for a fifth and final cinema viewing of the film, it is really that good to be back in such familiar surroundings. One hopes that Episode VIII however, will be brave and take us to less comforting stranger shores.