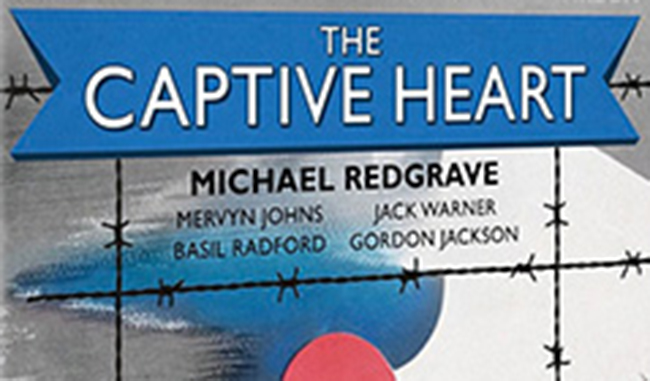 The production schedule of Ealing’s war melodrama The Captive Heart spanned both the actual wart taking place and was concluded in peacetime as principal photography ended after VE Day. It was the first of what was to be several World War II prisoner of war films. Other well-known and popular films that were to emerge from Britain over the next few years included The Wooden Horse (1950), The Colditz Story (1953), Reach for the Sky (in part at any rate, 1958) and Very Important Person (1961); in Hollywood that also included Stalag 13 (1953) and the big daddy of them all The Great Escape (1963). (These are only films that dealt with the war in Europe and not the Japanese front which would require a different list of its own.)

Yet for its failings it has to be remembered that this is an early variation of the genre that would be perfected by the likes of The Colditz Story. The film opens with the fall of France in June 1940, with captured British soldiers being marched to their final destination to a newly built POW camp near Aachen. To establish its realism the film was actually shot on location near the Rhine while the Allies were still advancing through Germany. As they are marching to the camp we are visually introduced to all the different main characters (or, being this is an Ealing film, types) and we are shown flashbacks of their loved ones back home. There is the Scotsman (Gordon Jackson) who is thinking about his sweetheart he proposed to at the station as he is ready to live, there is the working-class corporal (Jack Warner) and his homely wife (Gladys Henson, who he would be ‘married’ to again in the long running TV series, ‘Dixon of Dock Green’) and his best pal, a Welshman (Mervyn Johns) whose equally homely wife is pregnant but has been told because of her age that she may be risking her life. There is also most centrally the stranger (Michael Redgrave) who has arrived in the camp. The rest of the inmates are mistrustful of him because of his fluent German, that he speaks to the guards and remains aloof from the other prisoners. When they are about to expose him as a spy he tells them what could be an incredulous story of how as a Czech he had escaped from Dachau Concentration Camp, assumed the identity of a dead soldier and taken his dog tags and photos of his wife. Meanwhile his own wife and child had been killed by the Nazis. When a Gestapo officer arrives at the camp he suspects that he knows the man from somewhere, triggering suspense as the audience suspect that he will learn of the man’s true identity. The man, Karel Hašek begins writing letters back to his ‘wife’ back in blighty so as not to raise suspicion with the Gestapo. What he doesn’t initially realise is that the dead man’s wife (Rachel Kempson) whose identity he has assumed is estranged from her husband. She begins to be moved by her ‘husband’s’ new found prose writing and re-kindles what she believes to be their relationship.

There are several things going on with this film. On the one hand there is a stoic Britishness; the type of attitude that many have said to have got Britain through the war; that famous stiff upper lip. There is also a realism about the projection of life in the camp. None more so than in the scenes than Captain Hašek writing to his ‘wife’ and telling her about how the men are trying to create a Little England here as they tend to allotments, play cricket and turn their backs to the barbed wire fence inwards. On the other hand there is the melodrama of back home, none better played out than the developing love story between Captain Hašek and his supposed wife. But there are other relationships that develop throughout the film. The Scot played by Jackson is blind and calls off his engagement from stubborn pride and arguably strongest of all the two working-class men of Warner and Johns who treat the war and its hardships and loss with stoicism. This is overshadowed by the film by the central relationship and over-melodramatic ending that creates a duality with the realist other story. Never the less this is classic Ealing, if often overlooked. It has all the usual social and national elements of an Ealing film. For many the melodramatic elements, literally ending with fireworks are a bit kitsch but it also has its defenders. The introduction to the film is by Charles Barr, the eminent Ealing historian who 35 years ago published one of the definitive biographies of the studio and who confesses here that in this book he had often criticised Basil Dearden’s films with producer Michael Relph as somewhat fluffy and throwaway, but here admits that he was wrong and that his films and this one particular have a much greater depth to them. It is a good addition to the Vintage Classics series on Studiocanal making their collection of not only Ealing films well covered but also other British classics.