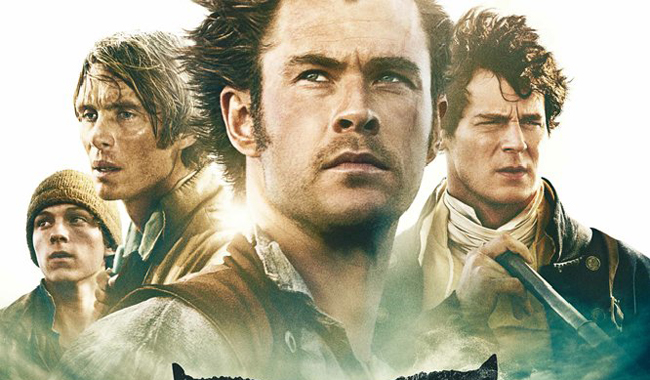 In The Heart Of The Sea Review

Ron Howard is back at it with previous collaborator Chris Hemsworth to bring to screen the story which inspired possibly America’s greatest work of fiction, Moby Dick. But In The Heart Of The Sea proves to be Howard’s own white whale; he can’t quite have the affect he would wish in this particular picture.

Hemsworth stars as Owen Chase, first mate on the Essex, a whaling ship headed by Benjamin Walker’s Captain George Pollard Jr., a man from a whaling background thrust into a world of ocean.

The Essex is the biggest and best ship built in the town of Nantucket, and is set out to sea with a stellar crew, filled with oldies who know their way around a whale, and newbies who’s shoes have never been damp.

Of the crew is Tom Holland’s Thomas Nickerson, a young boy who, in years to come, will narrate the tale of the Essex to Herman Melville. This is where our story is narrated, with Brendan Gleeson and Ben Wishaw acting as storyteller and listener respectively.

The story goes from Nantucket, out to the Pacific and right through to the story of the white whale, and it’s resulting chaos and darkness. With all that this story should entail, the film sadly feels like it skims over the surface, never diving into the vast depth of what could have been a truly amazing story of human survival. With the knowledge that this is a true story, it seems like a disservice to miss out and gloss over some of what occurred.

The greatest performance comes from Gleeson, as he slips from holding back on some of the details of depravity to finally coming forward and speaking of the horrors him and his ship mates had to endure. It is a performance that Gleeson could have done in his sleep, but really goes for it here and is increasingly haunting as the film goes on.

Not to take away from Hemsworth, Walker, Holland or indeed Cillian Murphy, the ship’s second mate Matthew Joy. Each of these men produce stellar performances; the issue is that they aren’t given enough to do.

The film needs to be a 3 hour epic, but at 121 minutes everything is packed in as tightly as a tin of sardines. This is the biggest flaw, as everything else is fine and entertaining, but without the correct time to truly embrace and fathom what is going on, we as an audience are missing out.

Hemsworth undergoes significant weight loss for parts of the film, and it is easy to see his insistence to be taken seriously as an actor. And he should be, he has put in some fantastic, memorable performances, in particular under Howard’s guidance. But when he is not given enough time on screen, it’s tough to understand the depravity of his situation.

We didn’t have enough time on Nantucket, the white whale is only a frightful presence for a short period in the middle act, and the final third of the film is the most rushed. Perhaps Howard didn’t want his film to go down a somewhat horror route, but for this film to be taken as a serious Oscar contender, it is necessary not to shy back from the true events that shaped the surviving men of the Essex.