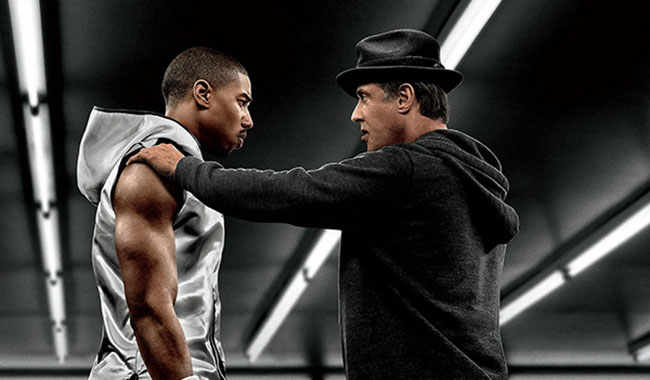 Aware of the need to not only be spoiler free, but also to the point; what follows may for some seem indulgent or unnecessary, but needs must.

Rocky V sucked thirteen kinds of balls, and was an even more effective ‘the 80s are well and truly over’ downer picture than Bill & Ted’s second (very) Bogus outing at around the same time.

Well, it’s not clear, and this isn’t the forum for discussing it, however 2006 saw Sylvester Stallone recognise and heal the wounds inflicted on poor Rocky by that lacklustre fifth movie, with the release of his critically acclaimed love letter to the character Rocky Balboa.

Pretty much ten years have passed since then, and with no further Rocky movies on the horizon, the clever money would be on thinking that Sly had said all he wanted to say about the Italian Stallion, and was happy to let the character go to seed. As it turns out, a young filmmaker (and massive Rocky fan), by the name of Ryan Coogler; had other ideas.

Now, admittedly when the word first came out that there was going to be what was being termed  a ‘Rocky Spinoff’ called Creed, and it would focus on Apollo Creed’s son…oh and that it would not (necessarily) feature the character of Rocky at all. One has to admit to having been somewhat less than enthused. All sorts of terrible imaginings of how this concept could be truly mangled flashed between many a Rocky fan’s temples I’m sure. It had potential train wreck written all over it.

Fast forward the best part of a year or so, and Creed is here.

One could list a few key factoids about the film to calm the nerves of the aforementioned worried Rocky fans, but timing is everything, and as fingers hit laptop keys typing this review Sylvester Stallone has just picked up the Golden Globe for best supporting actor….

I’ll let that sink in a while…

OK, we are back in the room, and my goodness didn’t we all get the wrong initial impression of Creed way back when it was just a concept? Yes we did.

So, for the record; and before we go any further, here is a brief synopsis:

It is the story of Adonis Johnson (Michael B. Jordan); a talented but troubled young boxer who is the son of Apollo Creed, a father he never knew. He comes to Philadelphia to seek out his father’s dearest friend and old rival, Rocky Balboa. Along the way he meets Bianca (Tessa Thompson), a struggling musician in the apartment downstairs.

Adonis must come to terms with who he is, and what he wants out of life, and he hopes the Italian Stallion can help him do it.

OK, so Creed is not going to win any awards for originality. It is a sports movie in the time honoured tradition. It is a rites of passage tale. It is the journey of the troubled young hero through trials and tribulations towards some kind of reckoning. There is love, there is pain, and there is the wizened old master there to bestow knowledge and be rebelled against.

None of that matters a jot, because this movie does all these things spectacularly well.

Rocky’s presence in this film could have been written as nothing but a nice comfortable confection. It could so easily have been simply familiar fluff to help sell the movie to the fans, and lend it some validity in the ‘Rocky’ pantheon.

Sylvester Stallone delivers a sublime and frankly beautiful performance as Rocky. The tears are welling up simply thinking about how good he is.

Now, as a massive and very long standing fan of the series; I was as delighted with the aforementioned Rocky Balboa (2006) as the next person (although I would have preferred a version that included Adrian). However, as good as that film undoubtedly was; it did not bring me to tears or illicit spontaneous applause at the end of the screening. Creed did. Something in the way Sly has aged nuanced and imbued the character with such intimacy and genuine heart. It’s just crazy good. Couple this with the chemistry he and Jordan have, it’s definitely a ‘thing of bewdee’.

A word about the music.

There is a frankly rather dull trend these days to assume that if your movie’s main protagonist is black, then the soundtrack simply has to be nothing but Hip/Hop cuts. As if a black American character can’t be identified or represented cinematically with anything else. Well, as it is not true in the real world; so it is not true in Creed. It was deliciously noticeable that along with Ludwig Goransson’s orchestral score (which hints at but avoids the old Rocky theme), the soundtrack was just a few safe but refreshing baby steps away from the expected norm. Bianca’s music for example is definitely coming from a much more ambient, ethereal quarter than you might expect to see. It’s a small thing, but worth mentioning.

To sum up, all you need to know is this:

To call Creed a spinoff is to be technically accurate, but to massively sell it short. It also earns the right to be considered a bona fide Rocky sequel, and measures up nicely against the franchise’s best episodes. It is beautifully put together, and has an abundance of honest to goodness heart and soul.

It had this reviewer in floods of tears on several occasions, but was also funny and witty.

Who could ask for more?