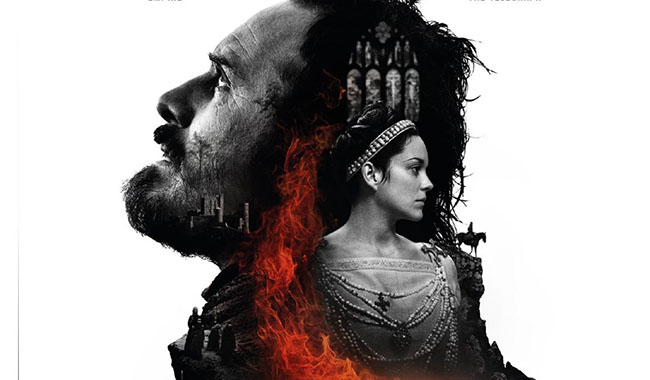 Shakespeare hits the big screen again – and in bloody and glorious fashion as well.

Michael Fassbender takes the lead role in this lovely looking and bizarre film. The supporting cast on hand is solid throughout.

Marion Cotillard can often fall foul in English language movies of letting her natural accent affect the tone and delivery of her lines. Here though, the magic of Shakespeare seems to have taken hold and given her an all new approach. Her delivery is impeccable, and her onscreen chemistry (vital as it very much is) just sparkles with Fassbender. It’s even nice to see the likes of Sean Harris (normally whispering and moping his way through movies) letting his lungs erupt as MacDuff for a change.

Fassbender is also no stranger to letting his natural accent get the better of him. We often laugh at the closing 20 minutes of his time in X-Men: First Class as “Irish Magneto” emerges from the recently beached submarine.

Here he too wavers back and forth, but it seems to matter not a jot.  Just as the fact that he looked or sounded nothing like Steve Jobs did not prevent him from putting in a compelling performance in that film, so here he also braves the screen and lets the look and the dialogue free him up and able to deliver perhaps arguable the best onscreen Macbeth.

If you think the chemistry of Fassbender and Cottilard works well here, then rejoice as they are reteaming along with the director, Justin Kurzel for Fassbenders long awaited adaptation of Assassin’s Creed.

As for Macbeth: The surrealistic picture adds depth to the dark tale, and will at least pull in visual cinephiles that are perhaps less keen on the words of the Bard.