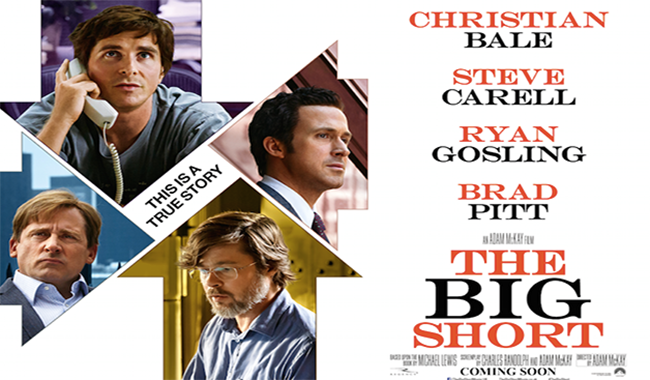 Adam Mckay takes a slight step away from comedy to stretch some dramatic muscles in this penned and directed film about the crash on 2008. Well… About certain individuals who saw it coming and then had to watch it happen.

Mckay earns stars for giving the film a solid look and narrative drive. At times when they need to explain what is going onto the audience they will literally wheel out a young named actress, call her out as who she is and then have her explain to the audience what is going on. Does it help? Not always, but it does create a laugh.

Other times you will have some dramatic events happen on screen only for one of the actors to turn to the screen and explain that this is just for the benefit of the audience and that things didn’t necessarily happen the way you are seeing them.

It’s a cute gimmick and works for the film

Of the cast there were four big names on the poster. Brad Pitt it seems is there for that purpose solely. His part is probably the smallest of anyone that is relevant in this film, but as a producer of the film as well he’s clearly in it for the subject coming to the public’s eye and therefore adding his weight as an actor to a small role gives them the use of his name and face on the poster to help promote it further.  No bad thing, unless you are expecting him to play an equal share on screen. But to be fair he does get to hammer home the impact of what is about to happen to the world around them when his two colleagues get a little over-excited about the money they are about to make.

Gosling’s role is a bit more important as he plays a part in the action, but he comes and goes for such lengths that you forget at first who he is and what it is that he is actually doing. Plus with the rug he has on his head you can be forgiven for thinking he’s doing some sort of a Ryan Reynolds/Ben Affleck impersonation

This leaves Bale as the man who first notices the problem and how to monopolise it for his clients better. Beyond that it’s a showboat of how Bale can delve into a performance of a man with a glass eye who loves listening to Metal and getting glued to his office in a kooky way. He acts more as instigator as opposed to being important to proceedings later on.

This leaves Steve Carell who, out of the four big name actors, storms through the film is a fit of rage, energy and bottled emotions to explode in most scenes that he plays in. If your money should be on anyone getting awards or nominations then stop right here at his name. Carell in recent years has been proving that there is very much more to the sum of his parts as perceived as a comedic actor. As a dramatic actor it appears that he is worth far more than in any other capacity.

The Big Short is still confusing (even with the aid of “pretty” actresses to help guide you along). But it is an important subject that continues to be raised in cinema (see Margin Call). This attempts to explain what happened and how it happened, but in the end you are still following money men, who by and large made out pretty well in the end themselves, despite how much they knew or tried to warn others about.