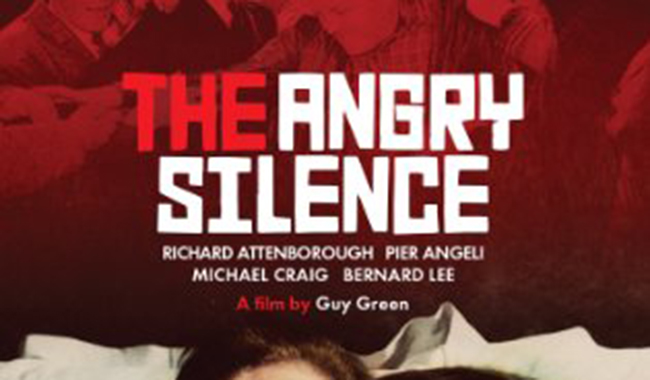 In the late 1950s into the early 1960s, lasting for a period of about 5 years what became known as the Kitchen Sink Drama was popular on both the stage and screen. Kitchen Sink dramas films were nearly always made in black and white and launched a whole new generation of actors including Albert Finney, Alan Bates, Julie Christie and Tom Courtenay. Usually made by Tony Richardson’s Woodfall pictures they were a reflection on post-war austerity Britain and were clearly influenced by Italian neo-realism. Other films that could not be definitively described as Kitchen Sink Drama include The Angry Silence because it is a story with a bigger picture than just about the central characters, displayed quite explicitly when the story becomes newsworthy.

The origins of the film stem from a conversation between the film’s writers and producer Richard Attenborough and Bryan Forbes and the co-star of the film, Michael Craig. They were in North Africa filming yet another among a plethora of war films being churned out in Britain throughout the 1950s when Attenborough bemoaned that he wished to play a serious socially aware character and a man who is not a coward but stands up against the system. Forbes too bemoaned about the war movies he often appeared in and being killed off early on to boot. Meanwhile, Craig had said that he had an outline for a story about a strike breaker or ‘black leg’ he had been working on. Once back in the UK Craig worked on the outline and presented it to Forbes and Attenborough. The origin of the story stems from when Craig was at the York Rep Theatre and he heard of a man who broke a strike and stood up against the unions at York Goods Yard. Forbes and Attenborough hired director Guy Green to sit in the director’s seat who agreed to work for a fraction of the cost.

The story opens in a community where many of the workers work for a metal factory. It opens with a nameless man (with glasses) arriving at a railway station and is picked up by the shop foreman (future James Bond M, Bernard Lee). Their conversation is somewhat abstract but it becomes apparent that this man is a union agitator. While the employees are making their way into work, one of the men we are introduced to is Tom Curtis (Richard Attenborough) who is concerned at just being told by his Italian wife (Pier Angeli) that she is pregnant and expecting their third child and is not focussed on the ‘dolly birds’ that his other co-workers are more taken with, including his friend and lodger Joe (Craig) who’s only real focus is chasing girls. It soon becomes apparent the Union agitators at the factory are calling for wild cat strikes. All but a few workers comprising of Tom Curtis and some older employees break that strike. On their daily walk through the gates they ride the gauntlet of the picket lines only to be yelled at as “black legs” and “scabs”. Eventually through intimidation and vandalism on the strike breakers property the older workers join the strike but Curtis, conscious of his impending child coming continues to break the strike causing the strike organizers to resort to dirtier methods of intimidation while the factory bosses are uncomfortable with him with the owner even wanting to have him sacked, fearing that he is more dangerous than the strikers. Even after the first strike Tom finds that he has been “sent to Coventry” by his fellow workers, even Joe.

This is an intelligent and political film from Messrs. Green/Attenborough/Forbes but has faced criticism that the filmmakers are not supporters of the working man. I would say that the opposite true. The film supports the working man who also supports his family – even at the breaking point of Tom Curtis’s family. However, it is true the portrayal of the shifty bespectacled union man (Alfred Burke) who has come from out of town and speaks regularly to his paymasters in London is something that can be read as a communist agitator who is acting outside the bounds of the official union who eventually broker a deal between the bosses and the employees and expose both the stranger and the gang of unintelligent ruffians (including a young Oliver Reed in an early role) that have turned to extreme violence. So in the end the unions and the workers come together to reset the status quo (which expressionistically had been achieved previously in Fritz Lang’s classic science-fiction film, Metropolis. On the films release it was overshadowed by that other working man film the same year, Karel Reisz’s Saturday Night, Sunday Morning which is a better structured film, although no one can deny the intensity of Attenborough’s performance; the best scene in the work canteen when an alienated Attenborough launches a tirade at his fellow workers after being sent to Coventry. Other moments come that divert from the focus of the film when the TV crews move in and a light hearted TV broadcaster Alan Whicker interviewing those at the factory turning the event into a cause célèbre. A beautiful print by StudioCanal makes each frame worth looking at in detail and the extras on the disc including interesting talks by the film’s original story writer and co-star Michael Craig and actress Nanette Newman talking about how her husband Bryan Forbes made the film with Attenborough.