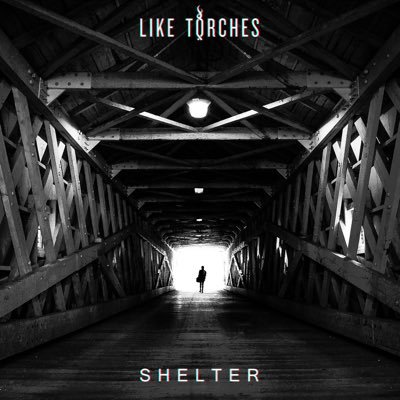 Although Like Torches are a Swedish group, they certainly don’t fit into the image that various well-known bands and genres have forged for the country – they lack the dreaminess of The Radio Dept., don’t have the heavy grunginess of the infamous Swedish metal scene, and do not resemble ABBA in any way, shape or form. Like Torches instead bring a pop punk flavour, with riffs, lyrics and (bizarrely) accents akin to American bands of the same genre. They’re not incomparable to Taking Back Sunday, whom they aptly supported on a European tour.

We’re no strangers to pop punk bands and all that they entail, but there’s a certain freshness to Like Torches’ new album Shelter, due out January 22nd via Rude Records, which keeps them from blurring into just another band full of pop guitar and fast-paced angst. Like Torches is very much a young band, and Shelter is full of according vitality. This is evident from the get go in its opening song ‘Swing by Swing’, in which the repeated “we’ve gotta go” throws us headlong into the frenzy of the album.

Shelter follows pretty much the same format of definitive pop punk throughout, with no real surprises or deviations – although there’s a notable sadness amid the chaos in ‘Coma’, with its meditations on time, and a pensive melancholy at the end of ‘Shelter’ in the title track, one of the softest and most heartfelt on the album.

Shelter is an album combining predominantly major tonalities with lyrics baring the hearts of the band, generally and unsurprisingly tending towards the lovelorn. This is fitting, since Shelter proffers sadness, but a fluffy sadness – the band can afford to use major lyrics behind howling their misery, because it’s a safe sadness that is always surmountable. However, the album sounds undoubtedly authentic and truthful; given that their first album Keep Your Head High debuted in 2013, Like Torches would seem to have found their feet with Shelter. This is perhaps why the album sounds so youthful and uncontrived; the band know what they’re presenting with this album, and there’s no pretense or pretentiousness about it.

While a new one to me, Like Torches are definitely popular in their home country of Sweden and its surrounding countries, with a song from their 2013 debut album coming in at number one on the Scandinavian alternative charts and reaching number seven on the list of the most sold singles in Scandinavia. There seems to be no reason that Shelter shouldn’t reach this level of acclaim, or possibly even surmount it. Given their widespread approval, it’s possible that Like Torches’ very deviation from what we might expect musically out of Sweden is exactly where the majority of their appeal lies.