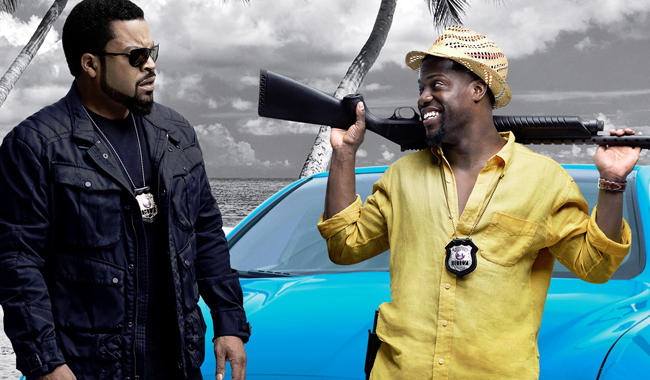 Ride Along 2 sees Kevin Hart and Ice Cube combine once more in another attempt kick start this lame duck of a buddy cop franchise. Retreading all the same steps of it’s predecessor, as Ben Barber (Hart) is still the thorn in James Payton’s side (Cube). Barber is also still with Payton’s sister (Angela) – indeed they’re planning their wedding.

But there’s also a drug bust to take care of, so the odd couple make their way to Miami to take down the drug lord. So, same story, new location. Bring in the half-clad babes in the sun drenched city, Ken Jeong doing his best Ken Jeong impression as the hacker with the intel about Benjamin Bratt’s drug lord, and Ride Along’s sequel is complete.

The second of the inevitable Ride Along trilogy hits all the beats of the first, but with less laughs and more of the pint sized Hart being tossed around and generally shouting incoherently as Cube continues in his inexplicable pursuit to get his soon to be brother-in-law fired, or worse, lose his confidence as a police officer.

As a comedy, the jokes come at you quick and thin, but the ones that hit are few and far between. The pacing also impedes the moment at which these jokes try to take affect, which may be for the viewers better or worse, it’s tough to tell in a situation such as this.

Again, many of these jokes come at the expense of Hart, be it getting stuck in a chicken coup (sigh), or being dragged behind a speedboat that cannot be stopped (sigh). Cube now has something of a love interest in Olivia Munn’s homicide cop though still spends 90% of the picture looking menacing at his would be partner.

It’s tough who to pin the blame on for such a lacklustre attempt at film which is meant to be enjoyable. The stars do try their damndest with what material they’ve been give, and to be fair you could say the same for director Tim Story. Could the screenwriters Manfredi and Hay be to blame, known for exemplary performances such as The Tuxedo, and Ride Along one.

Or are the general audience to blame? Instead of letting the first die the painful death it deserved, it succeeded (financially, not in making us laugh), and we are now left to deal with a sequel this passive and listless. There is something worrying when such a thing can push a film as coveted as the new Star Wars off the US box office.

Take a long hard look at yourselves, folks. We are fighting a losing battle, something needs to change, we deserve more, but why would the powers at be work any harder than they are if we allow them a victory with this.

Oh well. See you in 2018 for the highly anticipated final entry of the Ride Along trilogy, where the brothers-in-law will undoubtedly get up to more languid exploits. I can wait.