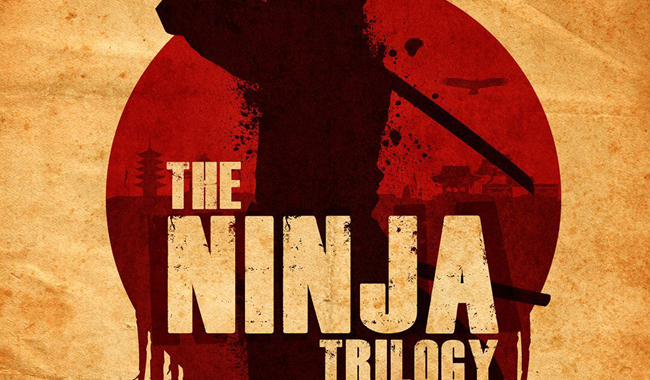 In the 1980s there were a handful of action films made revolving around Ninjas specifically rather than generic martial-arts. Perhaps, certainly in the UK the best known was the original of the American Ninja films starring Michael Dudikoff in 1985. However, the first was Enter the Ninja way back in 1981 and introduced the ninja to the cinematic action film. That film is included here in the Eureka! trilogy release and was the first of the three made over the next few years; the other two being Revenge of the Ninja (1983) and Ninja III: The Domination (1985). The three films only have a couple of things that link them as they are not sequels. One of those is that they were all made by Cannon under the production helm of the kings of the action B movie in the 1980s, Menahem Golan and Yoram Globus.  The other is the Japanese actor, Sho Kosugi who plays a Ninja warrior in all three.

The first of three, Enter the Ninja is the only film with any star power, namely former spaghetti western and Italian action film star Franco Nero (the original Django) who co-stars with British ‘70s B movie glamour queen Susan George. The film is largely shot in the Philippines and stars Nero as Cole, a veteran of the war in Angola who has travelled to the Philippines to visit an old army buddy. Cole has just finished his ninja training in Japan. Once he arrives at a farm he meets up with his old friend Frank and his wife (George) but soon learns that they are under the oppression of a local (white and western) businessman called Venarius (Christopher George) and his gang of thugs, allowing a German character with a hook for a hand to carry out his dirty work having cleared other farmer’s away. It soon transpires that the crooked Venarius is after the land because he believes that there is oil underneath and seems to be carrying out his violence with impunity. Needless to say that Cole and Frank use their specialist skills to attack Venarius and his army of thugs.

The next film, Revenge of the Ninja was made two years later. Golan-Globus were masters of even exploiting their own films to gain a quick buck as so they did with this film. Revenge of the Ninja is straight action centered around an operation of heroin smugglers using a factory that sells dolls to peddle their smack. One man who gets in the way is a Japanese man (Kosugi) who had witnessed most of his family being massacred by ninja assassins. Only an older Japanese lady and a baby survived the massacre and he has taken the family to Los Angeles for safety. There he finds once again he must adopt the warrior creed to help protect the now growing boy.

The final film, Ninja III: The Domination takes the film in a different direction with a supernatural twist to the plot. It actually matters so extremely that it is arguably the best in the series. It opens with an extended fight sequence in which a ninja assassin takes out a bunch of people on a golf course. He is shot by security and the police multiple times but does not seem to go down. His spirit then connects with a telephone lineswoman and part-time aerobics teacher (capitalising on another 80s fad and craze) who seems to have a possessed mission but can only get rid of the evil spirit through contact with another ninja fighter.

This is a curious release from Eureka!; one that would normally be released by that first rate label of both cult and second rate movies, Arrow Video so do not be confused that this is a Eureka! release. The picture quality, as one would expect from the label is first rate and will definitely be an improvement on the original VHS release that most viewers who have seen any of these films would be familiar. Never the less, despite the cult of these three films, they still remain bad films with some atrocious acting, some okay action choreography and B movie production values with most of the budget going on the action set-ups and pyrotechnics. The opening credit sequences to most of these films, but particularly Enter the Ninja are among their best aspect as Kosugi’s ninja demonstrates all the aspects of a ninja’s arsenal over W. Michael Lewis’s percussive score. One for the boys I suspect.