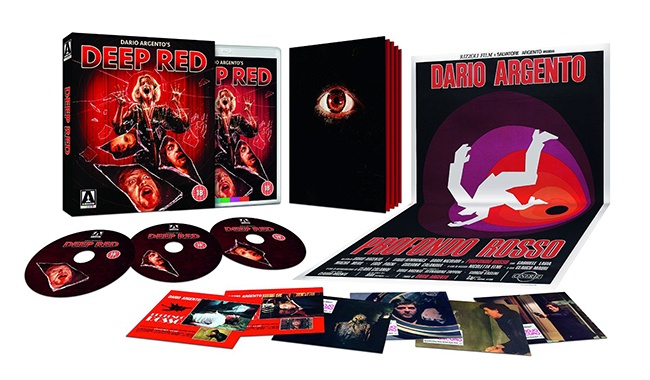 Arrow already released a very nice edition of Deep Red back in 2012 with a host of extra materials including a commentary track from expert Thomas Rostock, and interview ith Daria Nicolodi, and interview with composer Claudio Simonetti, an interview with director Dario Argento as well as two versions of the film (with about 20 minutes between them). Not content with that we have a return to the release here – with all those extras and more included (A larger booklet with essay writings), A visual essay from Michael Mackenzie, a double side poster, 6 postcards – and of course the main event – both versions of the film present in a 4K re-master!

Oh lord if a director is deserving of the 4K re-master then Argento is on that short list – and there are many other titles from Argento that deserve the treatment as well (fingers crossed!).

But Deep Red is often argued as his best.  And whilst others out there prefer the likes of Suspiria or Inferno, you can often find that most critics will concede that Deep Red is at the very least one of the director’s best films.

David Hemmings (as Marcus Daly) finds himself caught up in the murder and mayhem after witnessing the axe murder of a woman. Donning the role of amateur Sleuth, it isn’t long before the murder strikes again and the crimson flows to the floor.

All of this of course supported by the first score from Argento’s Goblin regulars. It’s important to note that this is the first score they did for film as not only has it remained one of their best, but helped pave the way for future works. The importance of the visual and what is going on with the music are crucial components in early Argento works.

Deep Red is a visual treat for the ears and the eyes. And yes it is among his best efforts.

Argento has had such a revival on blu-ray – thanks to the likes of Arrow video that it’s still a wonder why we are still truly awaiting a modern director to help push the Giallo format forward for modern audiences.

But when the older material is ageing as well as thius, maybe we still have time to wait, and time to spend soaking up what these previous films have to offer us still.

The three disc limited edition for this also comes with the full soundtrack for the movie as well – quite the package and of the likes we will always put her recommendation behind.