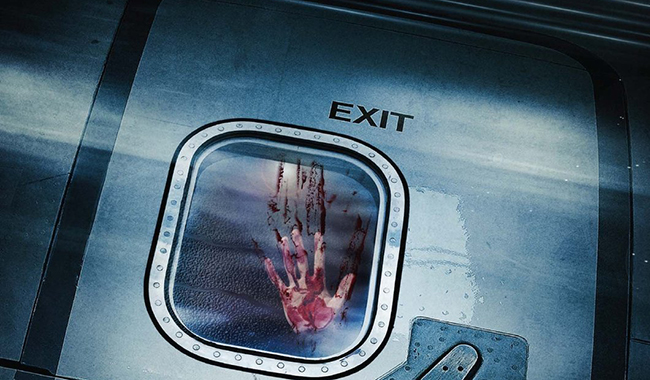 What would you say is your worst traveling / aeroplane experience?

I worked on a major motion picture last year and we flew to Austria in a small plane we were using for the shoot. Over the Alps, we flew into a snow storm. Everything outside was just white. Then the plane started to collect ice. I could see it slowly growing on every surface. It was surreal. We had no de-icing facility on the plane and so it became heavier and heavier as the ice collected. We tried to climb above the cloud but our poor little plane couldn’t go that high. In fact, we had collected so much ice we were sinking very slowly, because of the weight. And somewhere under the white veil was the jagged peaks of the Alps. Just in time, the decision was made to turn back. We made it out the ice storm and found a runway, the ice crashing to the ground as we landed.

Where did the idea for The Carrier come about?

We wanted to make an action film set on a plane, and do something fresh. Usually the threat, whether terrorists or snakes, is on the plane and the protagonists have to land to be safe. I thought it would be interesting if the ground was contaminated and the only safe place is in the air.

If there was an outbreak in the UK, do you think you’d be a survivor, leader or a goner?

I would be ruthless. I would be that guy with an eye patch driving a tank around, eating uninfected people when all the food runs out. I would probably die of kuru before the infection got me.

What is your favorite horror film and moment in it?

I am going to say the blood test scene in ‘The Thing’ where it all goes turbo. The whole buildup with the test and the tension between the group is incredibly well done.  Then when it all goes crazy and (spoiler) the guy’s head turns into a spider and walks off, it’s unbelievably amazing. The creature effects are so good. That, along with the black comedy makes it one of my favourite moments in horror.

What is next on your agenda?

We have a slate of four or five films Megatopia are currently looking to get funding for. We are also developing some TV ideas that we have – TV is the new film and all that. We’re excited about what the next year has in store.

The Carrier comes to DVD from Altitude Film Distribution on 25th January.