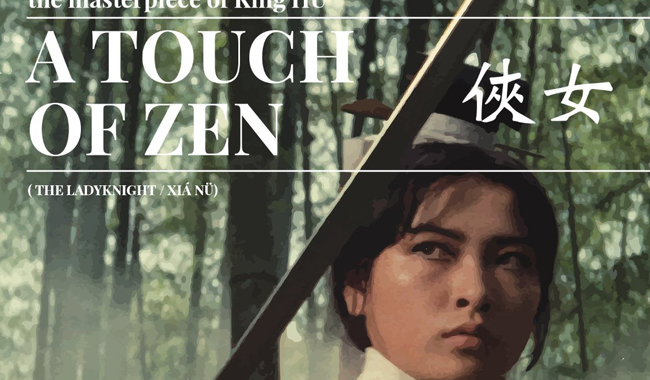 A Touch Of Zen Review

In October last year Eureka! in their Masters of Cinema series released an early film by leading Chinese martial-arts film director King Hu, Dragons Inn (1967). Hu’s seminal film in the wuxia genre though was A Touch of Zen, now also released by Eureka! in their Masters of Cinema series. Made in 1971 the director demonstrates in this film some imaginative camerawork. In the earlier film we can see how the director intelligently makes the camera move; some lessons he clearly seems to have learned from Sergio Leone in his Italian spaghetti westerns. Dragon Inn itself was a development from King Hu’s first masterful film, the film he made for Shaw Brothers in Hong Kong, Come Drink With Me (1966).

Not wishing to do the obvious and spending too long comparing this film with Japanese director Akira Kurosawa’s Seven Samurai (1954), A Touch of Zen at just short of 200 minutes and is a slow burner; it is  about an hour in until the first fight sequence. Hu sets the scene with a story of a painter. He is joined by a female fugitive who is on the run from corrupt government officials and the pair hole-up in an abandoned fort that is said to be haunted. There, a small band take a heroic stand and outnumbered they defeat the government forces by using intellect, wit, guile and the legend of ghosts.

Whereas in previous films it is the camera movements that make his films stand out from other wuxia directors, Hu adds an extra element of atmosphere and expressive lighting to A Touch of Zen. Some of the fight sequences, especially those in the bamboo forest recall those in Yimou Zhang’s House of the Flying Daggers (2004) with its balletic movements and fight sequences. This is where Hu departs from most martial-arts cinema. There is little of the extreme violence or flowing blood to be found in many martial arts films made in Hong Kong. Starting with Dragon Inn, Hu began making his films in Taiwan and here adopted a more poetic and balletic style that was visible in Ang Lee’s homage Crouching Tiger, Hidden Dragon (2000) and the aforementioned House of the Flying Daggers. Hu also uses nature and the seasons to develop this poetic style as can be seen with uses of snow and ice, spring pollen and birds, sun and most especially mist; he even uses the soundtrack to come to life in most of lens flares appearing through the mist. Gone has the more westernised spaghetti western score and instead adopts a more eastern score. The film comes as a dual format and as usual with Eureka! the picture quality is outstanding using an anamorphic widescreen process to good effect, although when the camera pans the anamorphic effect can be jarring. Two documentaries accompanying the disc are a 15 minute piece by David Cairns about the poetry of Hu’s films and a 2011 documentary looking at the career of King Hu.