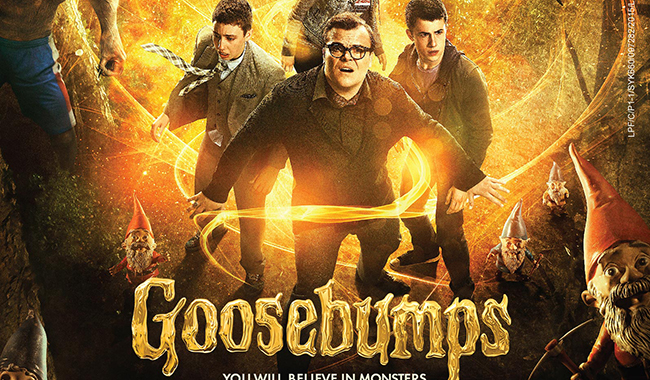 L. Stine, author of the bestselling Goosebumps book series, once characterized his work as “scary books that are also funny.” Although any adults in the audience may have a hard time being scared by director Rob Letterman’s film version of Stine’s work, Goosebumps is funny and – sometimes – fun.

Darren Lemke’s script certainly stays true to the conventions of Stine’s books. Enter Zach (Dylan Minette), the film’s protagonist, who is trying to settle into his new home of Delaware, Ohio, with his recently widowed mother (Amy Ryan). Thankfully, the film stops short of making Zach the kind of obnoxious teenager we have come to know all too well from other teen flicks. Lemke’s script at least allows the characters, who otherwise are pretty much classic Stine stock, some refreshingly sarcastic lines that add a few enjoyable moments to the first quarter of the movie. If only the remaining three quarters tried a bit harder to keep it up.

Events kick off pretty quickly when Zach is befriended by Hannah (Odeya Rush), the girl next door, who clearly has a secret. Why else would her father, the reclusive, unfriendly and somewhat sociopathic Stine (Jack Black) keep her inside all day and threaten Zach with unspecified horrors if he doesn’t stay away? Obviously, Zach can’t be expected to heed any of Stine’s warnings or threats (they never do, do they, just like they always run upstairs rather than out the door?)

Convinced that Stine is up to no good, Zach trespasses onto his neighbour’s property, accompanied by his new and reluctantly trusty sidekick Champ (Ryan Lee), to rescue the daughter in distress. Chaos ensues when Zach and Champ accidentally release Stine’s scary fictional creations from their books. What follows is a somewhat lengthy chase through a town suddenly overrun by the Abominable Snowman of Pasadena, a giant praying mantis, an army of garden gnomes and other miscellaneous creatures, including aliens with freeze rays. They are commandeered by psychopathic ventriloquist dummy Snappy who is one of the few non-CGI monsters in the film and actually a little bit creepy. Needless to say he has a bone to pick with his creator and isn’t about to return quietly to the shelf.

Annoyingly, the film capitalizes so much on spectacle that it leaves behind most of what looks promising in the beginning. The plot, clearly not a priority when monsters are on the loose, is thin and the twists predictable. Credit to the actors, who do good jobs with the little they are given, and Danny Elfman, whose soundtrack, although not his best work, doesn’t disappoint. The cinematography’s way of conveying that prickly sensation of the little hairs on the back of your neck standing up isn’t particularly original – and a little overused – but it gets the point across.

There are some inevitable meta-dramatic moments, many of which are, again, not at all original but at least somewhat funny (“Now, let me tell you something about Steve King…”). There are also werewolves, zombies (called ghouls), an invisible boy and a haunted car.

Goosebumps is a little exhausting, very cliché and it drags a bit, especially towards the end. But it’s nice to look at, entertaining in places and it won’t disappoint the target audience it is so clearly aimed at.